Good morning peeps , hope your week was great . I have a new book from an author that I have read before but haven't read for awhile . MARKED BY MONSTERS  book one in the Ghost Crew series by Dagmar Avery . Stella Price 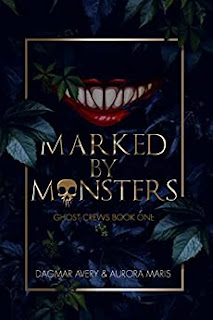 Three men Sybelle Strange never expected to see after they left her for their transition. In the three years they had been gone, she never once thought they would return, especially not after they had gone missing.

And she didn’t expect them to show up turned into nightmares.
But there is a price on her head, and the three of them are the only thing that stands in the way of the Monstera King of the East Coast getting his hands on her, and they take their job very seriously.
Because she was theirs, once upon a time
.And they have come home to collect what was promised.
With teeth, tentacles and claws.
MY REVIEW
Sybelle Strange is living in a time of fractals , men just really not themselves anymore and have an inner monster . Women have three or more men as her mates . Sybelle is special and after three years the men that have been hers since they were young, Come back to take her away and hide her because the Monstera King wants her for himself , She is theirs and noone will take her away from them . They maybe monsters but they are hers and they will do whatever it takes to keep her .
Ok now these characters where to start , I loved them and really got invested in them all of them . Sybelle is one of those women who come off as sweet but man this woman is one tough cookie. She is also loving and wants to just be loved . Now lets talk the men in this book oh my goodness . We have Thorn Balthazar and Atticus . They are all so sexy and dominant but also monsters . Thorn is well he is I am trying to figure out his monster . He loves to cook and take care of everyone and is well wicked in bed . Baltazar is more the protector and the comedian of the group . He is well I say he comes from the depths of hell and is like a bat in so many ways . He loves blood play with Sybelle. Now for my favourite monster  Atticus , he is very stoic a real thinker but oh my so sexy . I would call him like a leviathan from the sea . He has tentacles and boy they sound like fun .  Each man is strong and ready to fight for the one they love but together they will burn down the world to keep her safe .
Right off the bat I am going to tell you that this might not be the book for some people . If you like a little deviant behavior and monster sex . This is the book for you , I mean the authors really take you on an adventure ride . Yes this is a reverse harem but it is also so much more . It is a love story that started when they were just kids . There are a lot of twists and turns that will have you on the edge of your seat and there are a lot of smexy times where you might get your fingers burnt from the heat coming off your kindle . I really loved the kind of sci fi vibe it gave off also . I read this book in an evening and I will say this is the first book in a long time that gave me a book hangover . I strongly recommend this book to anyone who wants to add some monsters to their life . Check it out .
Posted by BOOKS TO CURL UP WITH at 7:29 AM