WE ARE 6 DAYS INTO JANUARY

Welcome to day 6 of January , still as cold as ever up here on the ranch . So I dove into two of my favorite authors . Welcome to book ten in the Midlife Spirits series .  HAUNTINGLY HAPPY by Hp Mallory and J.R Rain . 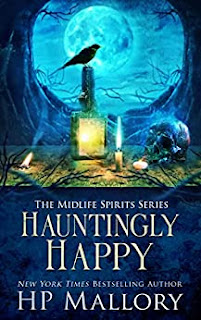 When Luke Montague was hit by a truck, courtesy of Angharad’s witch magic, I was in shock. But, when he opened his eyes and looked up at me, saying “ma minette,” I knew my life would never be the same again.

And I was right.

But, even with Drake alive again, everything isn’t daisies and roses. No, far from it.

I’m still playing puppet on a string to Guarda (ahem, zombie puppet on a string) and important artifacts are still going missing throughout New Orleans, stolen at the hands of ghostly children. As if that weren’t enough, there’s a witch terrorizing the city with wands of licorice that turn into deadly snakes.

And my sudden onslaught of dreams of the Colonial 17th century are somehow related, I’m sure. In my dreams, I’m in a garrison under attack from ghostly invaders and they’re searching for someone—someone who, in turn, is searching for me.

Yep, just another day in the life of Peyton Clark, spiritualist, medium and perpetual mess up.

Peyton and the gang are back and having one of the worst weeks of her life . Luke Montaque is dead and lying in her living room until the moment he opens his eyes and she hears  mon minatte . Now her life is going to change and sometimes not for the better . She is still the puppet with the strings being pulled by Guarda . Now artifacts are being stolen by ghost children. If that isn't enough to drive a person insane there is a witch going around terrorizing people with licorice whips that turn into deadly snakes .Then there are the dreams of 17 century Colonial times where some one is trying to find her . This is a typical day in her life  will she come out this with all her friends intact and will she be able to shake the zombie puppet from hell .

Peyton and the gang is back and honestly funnier then ever . Poor Peyton has had such a bad day and its only going to get worse . You really start to feel for Peyton . She is strong but she so trying hard to keep her life together. Drake is finally in the flesh and wow i must say you thought he was sexy as a ghost he is even sexier as a flesh man. They are such a great couple and i love how well they work together . Ryan is well he is really not himself and man he is just scary in so many ways . There are a couple of fun cameos in this book Wanda and Poppy make an appearance and man they just add to the chaos of the main characters .

This is a fun read , I really love this series so much . The authors really know how to take their characters and put them such fun characters . The characters are well written and getting more and more complex with each book . I found myself on the edge of my seat through out the book and then laughing uncontrollably. There are some great twists and turns through out this book and you will get sucked in by the end of chapter 2 . So if you want a great series check them out  for your winter reading to get through the cold snap