Good afternoon peeps , sorry I am late today its still really cold out . So it was a tea and a good fairytale this morning . Today I have book seven in the Happily Never after series . EMBER  by Plum Pascal . 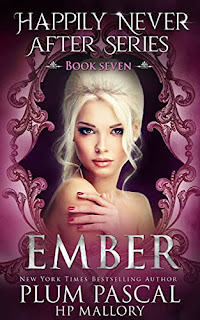 Fairy Tale Princesses Like You’ve Never Seen Them Before…

10 Champions destined to defeat an evil that threatens to wipe out the land of Fantasia...
Ember relies on two things in her life: Cleanliness and order. Owing to a traumatic childhood, she’s got OCD and clings to control, doing her best to avoid people and men, in particular.
When a handsome stranger named Aimes Padmoore comes to her cartography office in Sweetland, claiming he needs her help deciphering a map that belonged to the Blue Faerie, Ember wants nothing more than to assist him and send him on his way.
What she’s not counting on is another meeting with the young man who, this time, brings a friend—the prince of Sweetland—Blake Nonpereil. And Blake is just as handsome as Aimes, which causes Ember quite a bit of angst because both men are nothing but trouble as far as she’s concerned.
When Aimes and Blake declare their wish for Ember to travel with them while they attempt to recover yet another map, she staunchly refuses. But when a third man gets involved, Vaughn, he forces Ember’s hand by targeting her where she’s most vulnerable—her family.
Forced into traveling with all three men into the Anoka desert and beyond, Ember finds she might end up needing them just as much as they need her.
MY REVIEW
Ember has lived in clutter her whole young life ,so when she older she has two things in her life keeping her life clean and orderly and deciphering clues on maps . Until the day that three men walk into her life and take her on the adventure of a life time . Where along the way she realizes that she needs these mean as much as they need her .
Ok let me talk to you about Ember and the boys . Ember well she is one shy woman who want to have her life orderly as possible . She thinks that the only way that she is helpful is with her mind . As she helps out the guys we see her grow and and come into her power . But I think that there is more to her then meets the eye . Yes she is the chosen one but i believe that she might be a dragon hidden in there . Blake well he is the prince and a very dashing man who is sweet and sexy . He just wants to be a normal man well as normal as a prince can get . Aimes is equally as sexy but in a gruffer kind of way . He is best friends with Blake and wants to do anything to find the map . Vaughan is well he is sweet under the gruff exterior . All three of these men are sexy and also have hearts of gold . When they are with Ember they are the  best they can be . They are valiant and fighters for love of Ember and to help sav Fantaisia .
It has been a long time for a Happily never after book . I am so glad when I saw that the author finally had written book seven . I will say this is a really fun read with a lot of smexy time going on. I love how the author has reimagined the fairytales and turned them in reverse harems . The stories are a fun fast read that will have you sometimes blushing along with some of the characters in the books. If you haven't started this series I would suggest you start reading . You will not be disappointed . Great reads for this cold weather.
Posted by BOOKS TO CURL UP WITH at 12:42 PM