WELCOME TO FRIDAY EVE ALL

Good morning my peeps , today I have book 2 in the Arctic Wolf series . NEW WOLF  by Hp Mallory and J.R Rain. 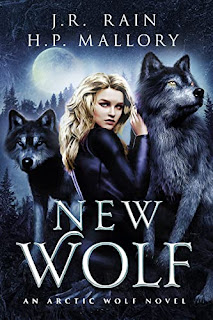 A break-in at the local bar seems at first glance a routine case of vandalism, likely the result of high schoolers looking to score some free booze. Except no alcohol was stolen, there's no evidence of an actual break-in, and the thief was clearly looking for something.

But what? Chief Elodie Matthews wants to know.
Meanwhile, as a new werewolf, her first official turning is rapidly approaching―and she's not looking forward to it. By all accounts, it's going to be painful and super weird, and she just doesn't have time for it.
Not when it turns out someone is hunting all the werewolves in town. No one is safe, least of all the new chief of police and the town's newest werewolf resident. With the full moon fast approaching and a killer about to unleash unholy hell upon the citizens of Hope, Alaska, it's up to Elodie Matthews to save the day.
The only problem is... she barely knows who she is anymore.
Or what she's about to become...
MY REVIEW
Ellie is the new police chief in Hope Alaska , her first case is a break in at the local bar. Thinking that it was kids wanting some free booze but there was nothing taken .She knows the owner is hiding something . So she has a mystery to solve and also she has her first change into a wolf coming up to . Thank god she has Alex to help her with both the mystery and the change .  Will she be able to stop the killer before he unleashes the hell on Hope . Will she be able to change to wolf and not loose herself in the process .
I so love these characters . Ellie well she is so much fun . She is tough and strong but she does have a heart of gold . She is having a tough time at the moment though. She is constantly hungry and well she wants to jump Alex's bones every time they are together . But she can't not until her first shift .  Alex well he is still dang sexy and sweet . He is the protector of Ellie and they are such a good couple together. They are both strong but they are stronger together .
This is a book you can read in an evening . The story is so well written with lots of twists and turns that could have you on the edge of your seat most of the time. This book will have you hooked by the end of chapter one . You will like the characters and the story line is so much fun to read . So if you want a good series to read check it out .
Posted by BOOKS TO CURL UP WITH at 7:18 AM