I know this is late but have been having problems with blogger today so I hope everyone is going to have a great weekend. Today we are reviewing DESTRUCTION The December People book one by Sharon Bayliss
BOOK BLURB

David Vandergraff wants to be a good man. He goes to church every Sunday, keeps his lawn trim and green, and loves his wife and kids more than anything.


Unfortunately, being a dark wizard isn't a choice. 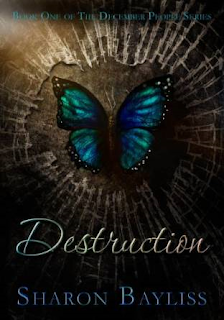 Eleven years ago, David's secret second family went missing. When his two lost children are finally found, he learns they suffered years of unthinkable abuse. Ready to make things right, David brings the kids home even though it could mean losing the wife he can't imagine living without.

Keeping his life together becomes harder when the new children claim to be dark wizards. David believes they use this fantasy to cope with their trauma. Until, David's wife admits a secret of her own--she is a dark wizard too, as is David, and all of their children.

Now, David must parent two hurting children from a dark world he doesn't understand and keep his family from falling apart. All while dealing with the realization that everyone he loves, including himself, may be evil.
MY REVIEW
This the first book in Sharon's new series.  It centers around David Vandergraff and his family . The family he has now and the children he has been looking for over eleven years . It starts with a phone call that David has been waiting for, they found his children and it goes from there . How is he suppose to tell his wife and their kids about these children . He goes and picks them up and finds out some disturbing news about what has happened to them. When his youngest son tells him that they are dark wizards . He just thinks that they are using the idea to hide the hurt and the abuse that thy went through . Until his wife sets him straight and tells him the truth about all of them being dark wizards not practicing .  Now he must fight the darkness and save them all .
This book had me sucked in at the beginning , it started off with a bang and kept going . You start  out wondering what happened to the children and then it turns a corner when you throw in dark wizards . You have the dynamic of the family in turmoil and the added the dark wizard aspect and watching everyone trying to cope .
The characters in the book are well developed . David isn't your typical guy who has to step up to be the hero. He is a man who went and had a past that is now coming back to him .He was hurting and he was scared , basically he is human. Amanda his wife to me feels like the evil that is in the house . Not only did she not tell him he was a wizard, she took away his memories . She did it to help him but she did more damage then good .  The kids are your typical kids they argue fight and make up . They all come together to and keep the family together. There is also another evil in the book . But the author takes on the dynamic of the family and getting them together. The evil comes to them at the last couple of chapters that will test the family .
I liked this book , I got sucked in and really liked it . There are just a few things that I have that can't give it the 5 star review . It seemed drag just a little in some areas. But over all I really like the book and the twists the author laid out for us . I would say put this on your summer reading list