Good Tuesday all , I hope your week has started off with a bang. Today we are reviewing
THE MURDERER'S SMILE by Kevin D'onofrio 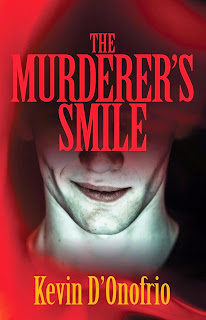 As the top-rated news anchor in all of Dallas, Tony Michaels has his smiling face on billboards all over the Dallas Metroplex which proclaim him to be "The Most Trusted Man in Texas." But when the dismembered bodies of his wife and son are found in his backyard, he is arrested and the media dub him "The Anchor of Death." Tony insists on his innocence, but the evidence is stacked heavily against him and the prosecution believes he has motive. Facing the death sentence and now haunted by disturbing nightmares, Tony receives an unusual visit and enlists the help of friend and private investigator Ryan Samuels. Now it is up to Samuels to find out anything the police missed in their investigation that can prove his friend's innocence and save him from the lethal injection.
MY REVIEW
The words that come to mind when I read this book was holy and awesome. This is a brand new author for me and honestly I couldn't put it down . I started reading and was on the edge of me seat the whole time . He starts off by dropping us in the middle of a big event and work our way back to the basics of the case . The next thing we know we are in the middle of the biggest news story of the year and do we really know who the bad guy is or even the good guys.
The characters are so well written  and the author takes us on such a ride with these characters . Ryan Samuels is the private investigator that ends up going back through the case and see what they missed . He is on a mission to prove that his friend is innocent. He is such a strong character that is a no nonsense man that will do almost anything to help out . Now on the other end of the scale there is Tony Michaels. The anchor man dubbed the ANCHOR OF DEATH. He is the one I couldn't figure out . He is very complicated, I couldn't really figure out if he actually committed the murders or is he being framed.  He kind of gave me the creeps when I was reading . In my opinion that is a sign of a good writer. Giving me goose bumps trying to figure out if he actually did it or not. There is also a very strong cast of supporting characters that help take you on a ride that you will never forget . The characters are all strong and very complex.
The author takes us on such a rollercoaster ride . There are twists and turns that will make you scratch your head and go WTH. There are parts of the book that have you thinking ok he did it and then you are thrown for a loop and you think that wait a min maybe he didn't. Then another twist that will make you think that OMG  I think he did it again . I love stories like that, stories that make you think and keep you on the edge of your seat all the way through the book . I couldn't put the book down.  I was turning pages well into the night .  There is one thing though the author does talk a lot of sports in the books . But honestly it doesn't bother me at all . This is an awesome who dun it . So if you are an old time mystery reader or a reader of a good thriller check it out . I know I will be waiting for his next book.
Posted by BOOKS TO CURL UP WITH at 12:03 PM