GOOD MORNING ALL ITS TUESDAY

Good Tuesday all , just coming off a three day weekend. Today we are reviewing a book I just got on my kindle this morning but have been waiting for it. KEEP HER IN PIECES  by Stella Price 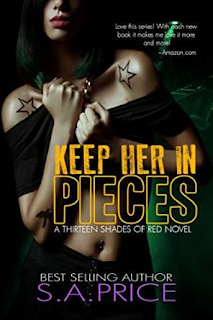 Keith Miller, ex roadie and recently deceased lieutenant in the US Army, asks from beyond the grave for one favor from Shades, and that’s to take his sister on the next tour with them. Keeping her away from her current headache is paramount, and he knows she’s going to need not only friends to deal with his death, but family as well. He never had better family by choice than Shades, including his blood brother, Chandler.

And Chandler Holms has it bad for his best friend’s kid sister. Gone is the girl with pigtails and awkwardness, and in her place is a bona-fied hottie complete with tattoos and a heart stopping body. Seeing her again brought his feelings to the fore. For a while he was trying to fight them in respect of his best friend, but now he’s faced with the reality that the girl is everything he’s ever wanted.

Rory Miller has been in love with her brother’s best friend since before she knew what a crush was. Chandler has been the focus of every waking fantasy she’s ever had, but she convinced he still sees her as the young girl that followed him around as a kid, the girl he was forever getting out of scrapes.

The final wishes of one man are going to set the two on a path neither expected. Close quarters of a tour bus means neither can hide how they feel. Too bad an obsessed ex wants to ruin it all.


MY REVIEW
OMG  I have been waiting for this book, since I finished  Pin Your Wings . It showed up on my kindle this morning so I grabbed my green tea latte and started reading . I could not put it down . I needed to know what would happen between Rory and Chandler. It starts where pin leaves off . Keith the ex roadie, who has just passed away . He wants to see his sister happy and Chandler is the man that he wants her with . They are set on a path that will unite their hearts and finally get to say good by to their best friend and brother .
The band is back together and on another tour, with a new merch girl. The characters both human and supernatural are entwined together again. Rory is such a sweet character, who has been put through the ringer with her brother's death and a crappy ass boyfriend. She does have an inner strength that starts to shine through as she becomes a sexy strong woman with a strong sense of herself and she ends up with the right man for her . Chandler is the sexy bad ass drummer for Shades but he has be pining for his best friends sister for a long time now and he is also having a hard time dealing with her brothers and his best friend's death. He tries to be tough but he also has such a soft side that he shows Rory. They make the perfect couple and fall in love in spite of the grief they share.
The rest of the band is there also , Dante XXid, Saffron , Nyx Declan Tosh and the rest oh you can not forget Rick and the a rest of the glimmer frog family.  I love all of these characters they seem like such a great family. I would love to hang out on the Shades bus with them .
Jack on the other hand , I would love to just throttle him and his skanky two timing ways . This is the guy your parents warned you about . You just want to smack him upside the head with a very hard two by four. Yes he is that slimy and you will want to punch him in the throat.
I started this book this morning and finished it in 3 hours . I was that into this book. It was like getting back together with some old friends . They are still as quirky as they were in all the other books , still getting up to no good and having fun. I love this author's wicked sense of humor , especially when she is talking about what one character would do to a clown. I laughed when I read that cause I hate clowns and it made me feel better lol.
She takes us on a magical journey in between tour dates and shows us what it is like to be in love with the one person you are meant to be with . But, she does it in her wise cracking style that is totally Stella Price . So if you want a great summer read , you need to read the 13 SHADES series
Great reads for an afternoon at the lake . Check it out you will be in for a great treat.