Good Thursday all  I am finally conscious enough to come back to the blog . Man summer colds and flu are a bitch .  I have had time to do some reading while on my back and one of the books I did get finished is a great horror book MAYAN BLUE by Michelle Garza and Melissa Larson better known as the sisters of slaughter. 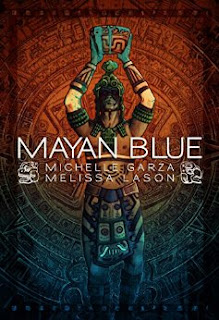 Xibalba, home of torture and sacrifice, is the kingdom of the lord of death. He stalked the night in the guise of a putrefied corpse, with the head of an owl and adorned with a necklace of disembodied eyes that hung from nerve cords. He commanded legions of shape shifting creatures, spectral shamans, and corpses hungry for the flesh of the living. The Mayans feared him and his realm of horror. He sat atop his pyramid temple surrounded by his demon kings and demanded sacrifices of blood and beating hearts as tribute to him and his ghostly world.

These legends, along with those that lived in fear of them, have been dead and gone for centuries. Yet now, a doorway has been opened in Georgia. A group of college students seek their missing professor, a man who has secretly uncovered the answer to one of history’s greatest mysteries. However, what they find is more than the evidence of a hidden civilization. It’s also a gateway to a world of living nightmares.

MY REVIEW
Welcome to the legend of Xibalba a place of torture and sacrificial deaths to the lord of the underworld. The Mayans believed that sacrifices of human flesh and sacrifices of blood to appease him . He is a living nightmare with his shifter creatures, he sits high on his pyramid and rules the underworld .
I found out this book from a friend in a book group and was instantly intrigued with the concept of a horror story written with historical lore. I fell in love with the story and the and all the blood soaked horror that came along with it . This was the first book I have read from these sisters and was so impressed . The way they involved the history of the Mayan culture and the story of  the university students that are out to find out about the legend.  Honestly who knew that getting extra credit would mean keeping your life intact and surviving .
I must say the characters in this book a diverse and complex . We have the party girl who wanted to party with the guys on expedition . I really wanted to slap Kelly a few times she was such an annoying character . All she wanted to do was party and the guys were just as bad . You just knew that the authors were setting them up to become sacrifices for the gods . But  I must admit the authors did put them through hell before the Gods got them.  Alissa is the geeky girl in love with her history teacher . She becomes a such a fighter and a strong character as the book continues . Her and Wes fight till the death if they have to . They go through hell and back to  try and get the doors to hell closed again and trap the evil behind its doors . The Shadow priestess is there to guide them and help them try and get out of the hell alive . You really want to cheer for Alissa  you want her to survive and get home safe . You will also be kind of scared of the shifter creatures trust me on this you will look at owls in a whole new light after reading this book.
This book will take you on a roller coaster ride . You will be shocked and dismayed the Mayan heritage and lore run through this story . They will take you to the depths of hell and back again . I am so glad this didn't turn out to be another run of the mill get out of the jungle trying to survive book . This one had me on the edge the seat turning pages well into the night . It also gave me a I better sleep with the lights on tonight kind of vibe as I read . I must say I now understand why the authors have been named the sisters of slaughter, they do it so well .  If you want to read a great horror story that is full of lore and history . Check out the great 4 star horror story that will have you on the edge of your seat. I promise you will not be disappointed in the least .