Good Tuesday all , hope everyone is having a good week so far,  I apologize for being away from the blog for a few days, we have a new member of the blog and he has been taking up a lot of time . Ok now back to books , today we are going to review BABY DOLL by Hollie Overton. 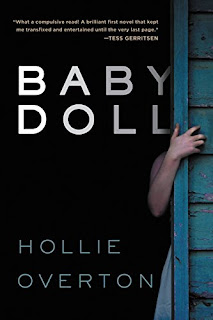 "What a compulsive read! A brilliant first novel that kept me transfixed and entertained until the very last page." -- Tess Gerritsen, New York Times bestselling author of Die Again

Escape was just the beginning.

Held captive for eight years, Lily has grown from a teenager to an adult in a small basement prison. Her daughter Sky has been a captive her whole life. But one day their captor leaves the deadbolt unlocked.

This is what happens next... to Lily, to her twin sister, to her mother, to her daughter -- and to her captor.

For fans of Gone Girl and Girl on the Train, BABY DOLL is the most tense thriller you will read this year.
MY REVIEW
Lets see how do we describe this book , it isn't a mystery and it isn't a thriller . I would say that this book is a psychological thriller that will make you really think about what actually happens after the victim comes home and the aftermath of putting a family back together.
lily has been held captive for eight years, most of her life and her daughter Sky has never ever seen the outside world . For them the real healing starts when they by chance get out one snowy evening .  I must say the real problems start when they get home . Her father is dead and her mom is not handling things well . Her twin sister Abby is really screwed up and is dating lily's boyfriend and is having a child with him .  She is a great supporter of Lily and always felt the guilt of what happened the day that Lily was taken .
The man that took Lily was no other then the favorite teacher in the school. He is debonair
and a pyscho all rolled in a handsome package. He is great at bending people to his will .
The characters I must say are very diverse and some are just a little crazy in their own right . The author handles the family dynamic very well. How each member of the family fights through their insecurities to help out lily.
I truly liked this story and the pages just flew by as I read . This is a fast read and you can get it done in a day . The characters are great and the story line is awesome but there are just a couple of things that I wish the author would of gone more in depth on. Like what happened to Lily in the basement and more about why he took her . Over all I did like this book and it will be a great read for those who like a thriller . I wouldn't compare it to GONE GIRL  like some are doing but it will hold up in its own right . So if you want a story that will take to a dark world and the aftermath of what happens when a child is returned home years later . Check it out you wont be disappointed