Good Thursday all , hope your week is going great . Today we are going to review a cool read I found on NetGalley. ABE LINCOLN ON ACID by Bill Walker and Brian Anthony. 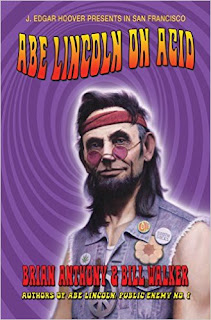 There are whispers even now that Abraham Lincoln never really died, that a voodoo spell cursed him with a terrible eternal life. It has even been claimed that he robbed banks in the 1930s with John Dillinger, only to mysteriously disappear once again into the pages of history. But the truth is even stranger than the rumors...

Watched over by a vengeful J. Edgar Hoover and held in a secret location near his old Springfield home, Lincoln re-awakens in the 1960s, and finds himself thrust into an era even more turbulent than the Depression, a time where a divisive war is once again tearing a nation apart and political intrigue and assassinations are rampant.

Escaping Hoover’s clutches with a clever bit of deception, he navigates an even more treacherous and unfamiliar terrain, finding an ally in John Voci, a young San Francisco folk-singer. Together they journey across a counter-cultural landscape, meeting those who believe a great man has returned, and striving to remain free from those who want to bury him once and for all.

Will Lincoln inspire the younger generation and save his country from its final reckoning, or will he turn on, tune in, and drop out?

MY REVIEW
What would you do if you realized that Abe Lincoln isn't actually dead but living out and immortal curse that was placed on him. Every has said that they have seen him and you never know you just might of . In this book we see Abe going through the big events of the past , robbing banks with Dillinger .  His handler is none other then J, Edgar Hoover, who keeps him locked up in his home in Springfield . As he wakes again in the 60's and helps motivate a group of stoners into to saving the planet when it looks bleak.
The characters in this book are so much fun to read . They rang from the president to famous figures in the past . They are a varied and so much fun to read . It is great to see Abe work his way through his life with these characters . You can see him work his honest magic with these people
I must say I had fun reading this book . I was sucked right on in , the story flows great and had me giggling all the way through . The way the authors take on the public people . They write with such wit you can't help but laugh and giggle as you read this book . This would be a great book for the pool or the beach . So if you want a book that will make you laugh and think check it out .
Posted by BOOKS TO CURL UP WITH at 8:35 AM