Good Tuesday all , hope your week is going well . If you like Fantasy books I have the book for you .
THE DRAGON SLAYER ( Dragon Empire book 1) by D.L COLON 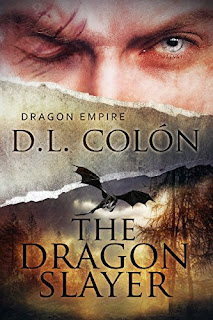 Glaycol Masters comes from a family of Hunters in the continent of Istagar.
Glaycol knows everything there is to know about every mystical creature and how to kill them, except for the Dragons. No one has been ever been able to kill them.
Glaycol still has to take his final test to become a Hunter worthy of bearing the name Masters, His weapon of preference; a great sword.
For his final test Bonca, Glaycol’s father, sent him to hunt the Chimera of the Valley of the Blood and bring each of their heads back. Glaycol has now killed the Chimera and is returning the Forest of Darkness, where he lives with his family on top of a mountain that oversees the city.
When he arrives his family is waiting for him, even his older brothers, who are also hunters, are there to celebrate the graduation of their brother. Once he presents the heads of the Chimera to his father, each of his family members gives him his gift. As they start they all give him a piece of armor until he has a full set of black armor. It is called, The Berserker.
Their celebration is cut short when the leader of the Dragons, Hyglarur, attacks them by surprise; killing everyone except for Glaycol. His new armor absorbed the fire, but he didn’t came out unscratched. He lost his right eye.
Glaycol, now driven by revenge and his family’s creed: Kill them all, has to find clues to where Hyglarur’s brother, Rotwar, is hiding. When he finds him Glaycol attacks, leaving him wounded and with a message for Hyglarur; Hyglarur, I am coming for you and your Dragon Empire. I now know that Dragons can be killed.
Glaycol Masters was once known as the Berserker, but a new name has been given to him. The continent will forever know him as The Dragon Slayer.
This is his Story.
MY REVIEW
Welcome to the Dragon Empire where the dragons aren't all good . They are the oppressors of all the realms . Meet the one man who with a band of elves and others out to destroy the dragons and bring the rightful people back to the crowns .  Meet Glaycol Masters the dragon slayer
I must say that I thoroughly enjoyed this book . I love fantasy and the premise of this book had caught my eye immediately . The dragons in this book aren't the good guys like in most of the books out there. They don't turn into hunky guys that will sweep you off your feet . These dragons are taking over and ruling with an iron fist . They have hurt people and killed of entire areas. Glaycol is a young hunter who is devastated when his entire clan is wiped out by the dragon Hyglarur .
The characters in this book are very diverse. We have fairies and elves humans and oh yes we have a succubus. The main character Glaycol is a very complex character , he is powered by an oath to revenge the slaughter of his family . He is a strong character that we see go through so many trials to get what he needs to do to avenge his family . We see him struggle and find love along the way also.
The rest of the cast of characters are wide and diverse , they all help Glaycol in various ways as he fights his way through his trials . They have his back when things get really bad and help celebrate with him when times are good . They are all very complex and make for great reading
This book is a shorter book compared to the other books this author wrote. I loved the story line and the characters . The book had a few minor spelling errors but it didn't deter from the story . The book is a whirlwind of emotions. There were scenes where you will laugh and yes there is a scene that had me shedding tears . I was shocked when the author did what he did to one of the main characters . I was like WTH  you didn't just do that  and why would you do that .  I couldn't put this book down and read it all in one sitting . If you want a really good read that will transport you to a realm where dragons aren't the good guys and man fights to take back what is theirs . This is the book for you . I cant wait to read more about the dragon empire .
Posted by BOOKS TO CURL UP WITH at 9:39 AM