Woohoo welcome to Thursday or like I love to call it Friday Eve. Today I have another new author for you all to read . Merethe  Walther and her book  MERCURY IN RETROGRADE . 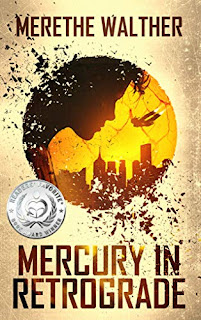 Aralyn Solari spent the last three years of her life in the galaxy's worst prison after a compromised run ruined her flawless smuggling record five years prior. Now that she's free and has the promise of an easy job with a ridiculously large pay off, her last gig should be a cinch. As long as she follows the runner's standard, anyway: get in, get out, get paid. Then, she can spend the rest of her years retired on Earth, hidden away with some well-deserved credits.

All of that changes, however, when she runs into her ex-boyfriend Caden Madigan: the man she suspects of setting her up all those years ago. Now, he's wearing a UDA badge and uniform, and says that she's in danger and being set up again. To Aralyn, the benefit of a huge payday outweighs the risks--or so she thinks until her "easy" job turns sour and she ends up wanted for a crime she didn't commit, her smuggled goods get stolen, and her ship--down to the toilet paper--gets trashed.

Now, Aralyn's got no choice but to try a last-ditch effort to get her payload back, get her money, and maybe even some closure... which proves difficult when she finds herself caught in a conspiracy that threatens everything and everyone around her. With government agencies and stone-cold killers on her trail, Aralyn's life has literally become a ticking time bomb. Caught up in lies, revenge, and a harrowing game of blackmail, one misstep could end with her captured, enslaved, or perhaps even worse: thrown back inside the galaxy's worst prison for the rest of her life, waiting to die.

MY REVIEW
Aralyn has been living the last three years in the worst prison in the galaxy . After she was compromised on a smuggling run After she is freed she is promised a big payday for a run that she can retire on .  Well after she runs into her ex boyfriend things change and not for the better . Deep down she thinks that he set her up the first time and she doesn't trust him very much . Will she take his advice or will the thought of all that money make her do something stupid .
There are a lot of characters in this story and they are well written some are stronger then others . Aralyn is such a strong character, she takes no gruff from any one . She really doesn't trust easily and will do what it takes to get things done. Aralyn can show that you can kick butt but also show emotion and cry.  Kita i think has to be my favourite character . She has been through so much in her past but she still is bubbly, sassy and loyal till the end.  The men in this book are strong too but the woman kind of put them in the back seat . I think that Riordan is a pretty cool guy , he has unbelievable hacking skills that keep him busy . Over all the characters are really complex and diverse.
Ok i am going to admit this when I sat down to read this book I honestly didn't know what i was getting myself into .   I really like sci fi but wasn't sure how I would like this book . Well lets say i got sucked in and couldn't put it down . The characters are great and I love that there is a kick butt heroine who can still be vulnerable and cry . The author takes us on a roller coaster ride full of twists and turns . You really can't trust anyone and you will be screaming at your kindle a few times . You will also want to slap a couple of male characters upside the head a few times .  The story moves a long a nice pace and the characters don't stay too long in one place so the story doesn't get boring . I truly enjoyed this book and going to look into book two . So if you like sci fi with strong characters this will be a good book for you .