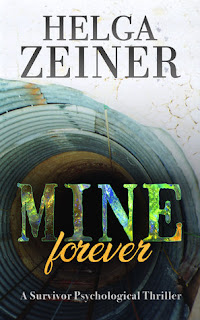 "You're mine," he said, "forever"—and a chill ran through her.


It’s 1978 and Johanna loves her adventurous new husband, Kurt, with all of her young, naive heart. She'll follow him anywhere—even far from their home in Germany to a small mining town deep in the Australian bush. Traveling across rocky seas, Kurt begins to unravel, revealing his true, disturbing personality.


Alone and isolated from friends and family, Johanna struggles to navigate her husband's increasingly violent temper and manipulative behavior. Exploited to help him dig in the mines for the legendary black opal, Johanna faces a miserable life, filled with fear and abuse. Her fate seems sealed—unless she kills him first.

MY REVIEW
When Johanna and her new husband are heading out on an adventure to Australia with her friends and their boyfriends . As they work in Australia Kurt starts to unravel and the abuse starts to get worse . Alone and scared Johanna struggles with the fact that Kurt is getting worse . Will she be able to survive or will she end up dead .
The characters in this book are complex and well written .  Johanna is a strong but also very naïve . She was a happy go lucky woman that was heading on the biggest adventure of her life . She is systematically being torn down and abused , you feel like you want to save her . She comes out the other side so strong and she is one tough woman . Her friends Eva and Isabella are hiding their own abuses and scars . They have all gone their own ways but they are all hiding a secret . You really just want to hug these women and tell them everything will be ok. Now lets talk Kurt and Uewe and Dieter . I honestly tried to like these men but oh it was hard . Kurt was unhinged and thought the world owed him . He was suave at the beginning but as the story went on he was evil . He was cruel and abusive and it just kept getting worse as the story went on . The other guys were to me followers . They were just as bad in their own ways . Dieter was just about as bad as Kurt in his own way .  You will love and hate each character at some point in the book .
I sat down to read this book , thinking about how I love thrillers .  This book is long and the author takes us on such an emotional ride . The characters are well written and the story is one that could happen in today's society . It does go on all the time . I yelled at my kindle a few times . I ugly cried all the way through this book . I just wanted to hug Johanna and the girls and tell them everything will be ok .  The ending will have you cheering . So if you want a good book that will keep you reading all night this is the book for you . Just be prepared to have tears rolling down your eyes . If you have any triggers over rape and abuse this might not be the book for you.  Just check it out for yourself .
Posted by BOOKS TO CURL UP WITH at 6:57 AM