Good Saturday all , its the weekend and its going to be a good one for reading . Today I have the second book in the Home grown Cafe book club series .  THE FARMER TAKES A HUSBAND by Mellanie Szeroto 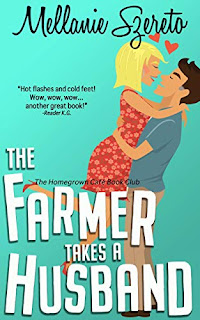 The women of The Homegrown Café Book Club are over 40, single, and loving it. Fate, however, has a different plan with a younger man for every last one of them.

Organic farmer Riley Fenniman is happily single at forty-seven and refuses to acknowledge an attraction to her younger accountant, let alone surrender to it. Unfortunately, a legal catch in her farm’s ownership and a health scare give her no choice in the matter. The women of The Homegrown Café Book Club have the perfect plan to ensure Riley’s cousin can’t get his greedy paws on her legacy, but it includes a husband and two pubescent girls.
CPA Deacon Jeffries has carried a torch for his favorite client for over a year, but she would probably sooner light him with it than return his affection. She makes an offer he can’t refuse to save her farm, one that makes his wish come true and gives his daughters the mother they need—except for lessons in dropping f-bombs. When the secret she’s keeping reveals itself, he’ll have to choose between self-preservation and love.
MY REVIEW
Riley is not having a great day, she is going through a bad health scare and to top it off she is fighting with her cousin who is trying to get his hands on her organic farm . What she didn't know was what was going to happen in a matter of 24 hours and the solution to the problem could be the man that she has secretly wanted for awhile now. Deacon is the man who can be the man that can help her out, Will they be able to come sort of agreement and finally realize that they are meant to be together.
This is Riley's book and man it is funny. Riley is a strong willed woman who actually does have a soft side but she doesn't show it too often .There is also kind of a sadness to her that you just want to hug her . She just comes off as combative most of the time , you really just want to shake her .  Deacon is a sweet guy who has been pining for Riley for awhile . He has been hurt before and just wants to be a good dad to his daughters. He is a good guy but he does have his flaws also. They are so cute together even when they are fighting.
This is the second book in the series and it was a good read, I must say that this book kind of had me a little upset . Riley was hard to really like she was just so hard headed at the beginning . She did redeem herself and you will start to like her . Over all this is a fun little read and you will fall in love with the characters . There is a little bit of drama in the book about a lump in the breast but over all you will have a fun time reading this book .You could read it alone but its such a short read that you could read both books in the series in one evening . I think these would be a great summer read .
Posted by BOOKS TO CURL UP WITH at 7:52 AM