Good morning all hope you are all having a great day . Today I have a new author to me, let me introduce you to Pam Funke and her book  THE RISE OF NICOLAITANES (The Apocalypse book 1) 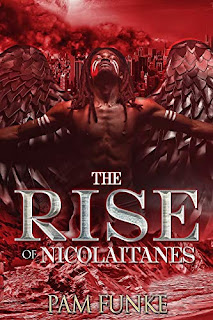 In a post-apocalyptic world, where every new day fulfills another prophecy from the book of Revelation, Serenity Lambert must choose a path. Will she go along with the majority or stand up for that which is good? A voice tells her to join a covert group in a military op, despite her better judgment, she agrees. She should have known better though, right? There's no way you would be so gullible as to fall for the wiles of The Voice or would you? There's no way you would never fall for the lies of someone or something so evil, right? Well, Serenity didn't think she would either. Life as she knows it is about to change forever. If she can't get out, her life will be in danger. But is that more important than losing one's soul?
A mysterious voice suggests to General Alexander Ludlow that a military op would bring an end to the world's evil. Things must get worse before they can get better. Isn't that the way of the world? Feeling overwhelmed by the loss of so many of his troops over the years, Alexander enacts Operation Dark Angel. Once he is onboard, the voice gathers together a most unusual group of people to ensure Operation Dark Angel's success. What role will it play in bringing about the rise of Nicolaitanes Balac?
MY REVIEW
It all starts with a voice to a young girl that really sets the world on its last days. When a child is born to bring on the end of times. Serenity is hears the voice and joins a covert group and is is out to find the evil . When the same voice suggests to General Ludlow that this war will stop the evil. The operation Dark Angel will bring on the rise NIcolaitane Balac.
This book is full of characters that are very well written and complex . Nicolaitane is well I believe that he is the anti Christ that is coming . He is such a charismatic man who has risen to power . You can't help but like him .  There are so many great characters that will have you flipping pages.
This is a long book but it doesn't seem like it as you start . the characters are well written and the story well written . This is a Christian telling of the story of revelations . This has a the vibe the stand going on , the good versus evil . I will tell you that it did take me a bit to get into the story but as soon as I got into the story it flew by . This book will have you asking the all important questions about God and the world. With the world the way it is right now and what is happening hits too close to home. This is an author that I am going to check out . So if you want a new retelling of the end of days this is the book for you , so check it out.
Posted by BOOKS TO CURL UP WITH at 9:03 AM