Good Thursday all, hope your Friday eve is going great. Today I have an new author and her book DEATH ISLAND  The Journey  by Kelsey Ketch 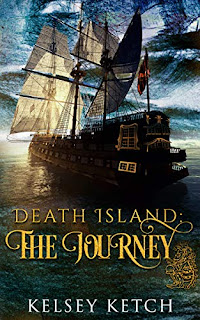 With her family name tainted by her great-grandfather’s crimes, Meriden Cummings could only dream of fleeing her oppressive life. Then she unearthed a piece of tanned skin, and her blood revealed an ancient map adorned with Mayan glyphs, launching her on the journey of a lifetime. However, she finds herself bound to the map, and there is a cost to her newfound freedom. One that will torment her mind as well as her soul.

After being shanghaied by pirates, Gregory Wilson escapes to a small English village where he runs into an obnoxious auburn-haired beauty. When he learns she is about to set sail on dangerous waters, he signs up to join her crew, hoping to defend her from the pirates seeking her great-grandfather’s treasure. But, will he be able to protect her from the ghost that haunts her or the curse running through her veins?
MY REVIEW
Meriden is living the life that she doesn't really want . All she wants to is work in her fathers shop and keep things going . Until the day a pirate ship attacks her sleepy town they are after her and the secrets they think she has . She has no idea what they are after until the day she finds the book that is bound to her by her blood . It is the adventure she is looking for . Along with the man who helped save her . Gregory Wilson is smitten with her and signs up to be beside her as they hunt for the treasure . Will he be able protect her from the ghosts of her past and the curse that is running in her veins
If you like pirate stories this is one for you to try. The characters are well written and complex. Meriden is a strong woman who is stuck in a life that she doesn't want to be part of . She has been an outsider her whole life only wanting to apprentice in her dads shop. Until the day it all changes and she goes off on an adventure that makes her realize that there is more to her and her life then the man that broke her heart and the father that died on a sea journey . Gregory well he is in my opinion a mess . He has been held captive and almost killed a few times . He is tortured and you really feel for him . He also has anger issues but when he knows in his heart that he will do anything to protect the one that he found and helped after an attack . They are surrounded by good men and men that want nothing more then string them both up . A typical pirate ship .
This is a story is such a fun read, I sat down and read it in an evening . The characters are well written and complex . The story is fun and come from the two points of view Meriden and Greg . You get to see whatever goes on in their eyes .  There is a lot of mythology that is in the book which adds a depth to the story . There were moments in the book where I really wanted to slap both Meriden and Greg upside the heads because they were both being really stubborn, but with any good character that too passes . This is a story that can be read in an evening and it has a mystery and intrigue and a little promise or romance . So if you want a fun book that you can read in an evening with a cliff hanger .Check it out .
Posted by BOOKS TO CURL UP WITH at 7:40 AM