WOO HOO ITS THE WEEKEND

Good morning all we made it to Friday and the day is looking great . Today I have book two in The Apocalypse series THE WORLD AT WAR by Pam Funke . 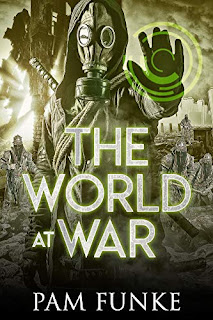 In a world filled with war, Serenity Lambert must find a way to survive. The only survivor from the bombing of the Hinesville Inne, Serenity Lambert is on a race for her life. Amnesia has clouded her past but it may save her future. A kind old woman, a doctor, and a pastor try desperately to keep her safe but will they succeed?
Chaos fills the globe as major nations wage war against one another. Nicolaitanes Balac continues his rise to global power. Will he become President of the entire world? What, if anything, will Nicolaitanes do for mankind?
Agitated, General Alexander Ludlow watches as Operation Dark Angel seems to not do the things he was promised. Global crimes have continued to rise and take senseless lives. The voice assures him that war is a necessary evil to complete phase one of Operation Dark Angel. What did he sign up for?
MY REVIEW
Serenity is trying to stay safe in the midst of of the bombing in Hinesville. With no memories of what happened she is in the race for her life . While chaos is running rampart NIcolaitanes is still on his rise to global domination on becoming the president of the world . But what is he going to do for mankind as he rises . Genera Ludlow is having second thoughts about Dark Angel . It is not doing things as was promised and the voice he hears is whispering that war is the right way to go to get rid of the evilness in the world . Will these three cross paths and will the world survive the end of days.
In the second installment of this series we get to dive deeper into each of the main characters .Serenity is fighting for her life and even with amnesia she is still a fighter . She is being protected by three people who all want what is best for the world . They have found their faith and want to have peace .  General Ludlow is well it seems like he is going crazy between the voice telling him that war was essential and his guilt is gnawing at him. He just doesn't know what he should be doing  everything just seems wrong . You start to hope that he is going to be ok . Then there is the man behind it all Nicoliatines , he is on a power trip on his way to being ruler of the world. You really don't know how to take him he is very charismatic  and everyone seems to love him . He is really not what he is portraying a real man hiding behind the mask . You really start to wonder what his true intentions are .  Is he truly evil or is there some thing redeeming in him way down deep
This is the second book in the series and starts right where book one left off .The author really dives deep into each character and their faith or the lack of faith. The author has a way of writing that will have you thinking about your own faith and what you believe in . This story goes really fast with each character really getting to the nitty gritty of what is going on . The story has a vibe like the stand . We have the good and the evil of Revelations . This series wil have you on the edge of your seat and have you thinking of how faith and God are in your life . So if you want a thought provoking series check it out .
Posted by BOOKS TO CURL UP WITH at 7:07 AM