Good morning all , its a windy, sunny day here . Today I have a good mystery for your reading enjoyment .  GHOSTS AND SHADOWS ( book 4 in the Detective Cadillac Holland mystery series ) 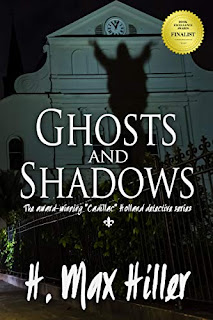 The oath Detective Cooter “Cadillac” Holland swore to defend his home against foreign and domestic enemies is put to the test when evil men from both sides of the border start a war on the eve of Mardi Gras, an election, and the first Super Bowl in Saints’ history. A shadowy government contractor has resurrected the blueprints for the classified operation that nearly got Detective Holland killed in Iraq, and doing so will threaten his life again. When Detective Holland’s friends and family are also put at risk, he is forced to call upon the skills and mind-set learned as a Special Forces and Intelligence operative to keep the peace between local heroin dealers and a violent Mexican drug cartel, outsmart a defense contractor, and take on a loose-cannon Federal official to avert a bloodbath when New Orleans can least afford it.

When detective Cooter ( Cadillac) Holland has sworn to uphold the law on home land and foreign soil. When he finds out there is a war brewing on both sides of the border . A shadow government is threatening his life yet again . He is forced to bring out his skills he learned from the special forces training and go after the ones starting the wars . Can New Orleans handle the onslaught that is about to happen or will it go down burning .

This story has some great characters to fall in love with .Cadillac Holland is a man who doesn't take no for an answer. He will do anything to keep his family and friends safe. We get to see him at his best and his worst as he fights the foes that are trying to take him down . He is trying to put the random things happening around him together . He is strong but also he is hiding something in his heart that is in his past . He is a great puzzle solver that will do what it takes to get the job done. We also get to meet his best friend  Tony who Cadillac knew form Iraq. They are such a good team Tony helps keep the criminals at bay . Together these two are a great pair that can do almost anything to stop the wars that are brewing .  There are so many other characters that you will fall in love with .

This is the first book of the series I have read from this author and I was pleasantly surprised. The characters are well written and complex and you can't help but caring for each and every one of them. The story is set in New Orleans which is a character all on its own . There is also a sup plot surrounding food . It plays a big part in this story .  This is a long book but you can read it in a weekend . I had a bit of trouble at the beginning but after about 4 chapters I was hooked and couldn't put it down . So if you want a really good mystery with some great odd ball characters check it out . I promise you will like it .