Good morning everyone , I hope that you all had a great weekend. I have the last book in a great series by Pam Godwin. COMPLICATE  book 9 in the Deliver series. 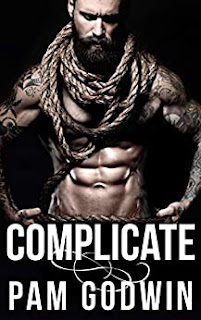 The heart-pounding conclusion of the dark and dangerous DELIVER series.

Cole Hartman is a mystery. He works alone, sleeps alone, and satisfies his aches…alone. He hasn’t touched a woman in seven years. No one will ever compare to the one who broke his heart. Until he stares into the seductive eyes of his enemy. He finally meets his match in the redheaded Russian spy. But she’s a dangerous risk. His obsession with her leaves him only one choice. If you love something, let it go. If it doesn’t kill you, hunt it down and take it.

When Cole Hartman is found out by a group of people that want information from him. He was captured by a group that want something from him and will do anything to get it. Enter Lydia the woman who is going to get the information out of Cole one way or another . She really isn't the person Cole thinks she is . She becomes his obsession and he will do anything to find her and make her his .

Oh my this book gave me all the feels trust me , this is the book I have been waiting for . Cole has been a big part of the later books in this series and he has always been mysterious . He is a loner  who has been hurt in the past . He is oh so alpha , sexy as sin but also been hurt I think sometimes beyond repair . Lydia well at first you just kind a want to slap her over and over . There are things that she does that are well not good . She is good at hiding her emotions to do what she has to do . Underneath the façade there is a woman who has been hurt and wants revenge. They are such a great couple and when they  are together they are dynamite .

This was a bitter sweet read for me . I have really loved the characters in this series and actually this series is the first series I have read from this author . I tried to read this book slowly but I just couldn't the author really put me through the ringer . The characters are so well written and complex you just really want to figure them out . I was on the edge of my seat most of the time while reading this book . Other times I was laughing and then there were times where it was hot, hot , hot . I am sad that this series is over but also very happy that the everyone finally got their HEA'S . If you like dark stories with characters that you can't help but love check out the DELIVER series .