Good Tuesday all , hope your day is going great and you have books to read and time to read them . Today I have another new series from two of my favourite authors .  PRINCESS OF LOST MEMORIES   by Hp Mallory and J.R Rain. 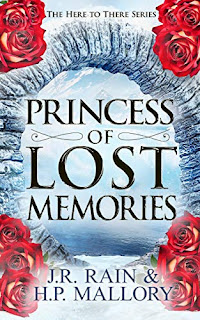 Welcome to the Second Land, a battle-torn world of elves, sorcerers, and upheaval…

Elle Takra is a princess, the last heir to the Takra throne in a far-off place known as the Second Land. Having grown up in the First Land, Elle doesn’t know she’s a princess. All she does know is that she’s in love with a man named Simon and she intends to make Simon her husband, whether he agrees or not!
Elle’s best friend, Sasha, does know the truth—a truth she’s been keeping from Elle for the entirety of their friendship. Sasha isn’t the twenty-two-year-old she pretends to be. Instead, she’s an eighty-four-year-old Elf who acts as Elle’s protector and has from the moment Elle was born.
Sasha knows there are too many people in the Second Land who want Elle dead. She just isn’t sure who—something she’ll soon learn when Elle and Simon are kidnapped and forced to return to the Second Land.
But Elle and Simon aren’t the only ‘First Landers’ who find themselves stranded in a foreign place, surrounded by enemies. Enter Patch Keaton who washes up on unfriendly shores after a freak storm destroys his sailboat.
Lost, confused, and eager to return home, Patch’s destiny becomes intertwined with Elle’s in the most unfortunate of circumstances…
MY REVIEW
Elle growing up in First land , doesn't know she is the last heir to the Takra throne . She is a princess and doesn't remember anything except that she is in love with Simon . But instead of Simon coming to pick her up it was her friend Sasha who isn't what she appears to be . She is there to protect and keep them both safe . All they want to do is get home and they aren't the only one . Patch finds them and is entwined with them . Will they be able to figure out what is going on and hopefully stay safe and get the princess back to her home .
This is a laugh out loud read . The characters are so well written and complex . Elle is a sweet girl who just wants to marry Simon and live happily ever after . She is sweet, kind and just a little naive .  Sasha is more then meets the eye, she is strong and a friend for life . But she is also a warrior that is there to protect young Elle. She kind of stole the show for me .She took over and just won my heart . There are so many good characters in this story you will find one that you will love .
This is a fun, fast read, I love these two authors way of writing . They can write dark and light and funny. This is the light and funny side of them. There were times in this book where I actually snorted out loud .  The story is interesting and the characters are so much fun to read .  I can't wait to see where the authors take the characters . So if you want a laugh out loud read check it out.
Posted by BOOKS TO CURL UP WITH at 6:36 AM