BOOK 2 IN READER ROUND UP NOVELS

Good morning all ,  I hope your weekend is going well . Today I have a new author to me TWILIGHT OF COLOSSUS  by Ian Kane . 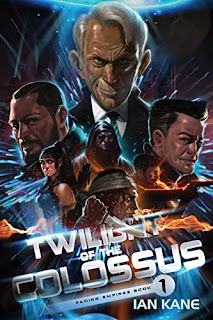 Earth's remaining governments are completely powerless against emerging megafirms that have taken over nearly everything by virtual reign. These corporate powerhouses are expanding quickly and crushing anyone who brings opposition.

Beneath the cities of the wealthy elites, super gangs are pitted against one another in what has become an intense struggle for territorial power. Day-to-day survival is a major accomplishment for most in the ravaged urban areas.
Ex-black ops warrior, Leonard Kilbane, commands a small band of resistance fighters, but formidable forces against them make it tough for this motley crew to stay together while leading their revolt.
Twilight of the Colossus is the first book in the Fading Empires universe, an epic, multi-part cyberpunk saga. It combines suspense and intrigue with heart-in-mouth action sequences, and nightmarish encounters—all in a near-future setting that could just come to pass. At its core, it's a riveting and emotional story of friendship against all odds.
MY REVIEW
The world has basically ended and the world's governments are useless against these megafirms that are taking over the world and running things  Leonard Kilbane is a resistance leader trying to thwart the gangs that are fighting for control. With his rag tag group they are taking down the rich and elite that are running the world . Will they be able to get back to a world that was before the fall or will the gangs win.
This is one of those books that has a main character that well defies what most characters are . Leonard Kilbane is a ghost a man of many characters that lead him to a life of intrigue He is strong silent and deadly . He is a torn man and wants to do what is right . He along with Bloodwolf are a just a few of the characters . They are all well written and complex .
This is one of those books that you will read and honestly use your brain sometimes through out . There is so much going on through out the book.  There is so much going on  you will be on the edge of your seat most of the way through . I found that sometimes it was a little over wordy and I think it was more sci fi then steam punk . But over all I really enjoyed this book so if you want a book that will have you on the edge of your seat and take you on a wild ride this is the book for you. Check it out .
Posted by BOOKS TO CURL UP WITH at 12:13 PM