Good morning peeps . hope you Wednesday is going well so far . One more day and back to reader round up but today I have for you from one of my favourite authors A STREAK OF LIGHTNING  ( book 10 in the Warlocks McGregor series ) by Michelle M Pillow 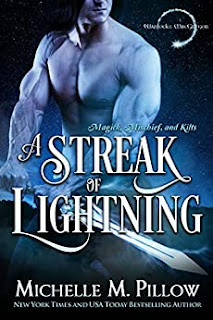 Lightning isn’t the only thing streaking in small-town Wisconsin.

Warlock Raibeart MacGregor is on the prowl and looking for his true love. He has only one question for any lassie he meets, “Will ya marry me?” With his sanity often questioned by those who know him best, Raibeart believes there is a method to his madness. At least he hopes so. He’s convinced his true love exists, but he just can’t seem to find her.

Plagued by nightmares, he’s compelled to run himself to exhaustion each night to keep them at bay. The fact that he prefers to drop the kilt while doing so is just a bonus. But when those nightmares begin to bleed into reality, he realizes the woman he’s been searching for is literally the one tormenting his dreams.

Katherine Galbraith has been imprisoned by magick for so long that she can’t even remember what her crime was beyond the vague impression that she once loved a warlock. Bound to a world that never changes, she spends her days wishing for an end. But when prison walls begin to crack, she must decide if she wants a second chance at lost love or if that love is the reason for all her suffering.

MY REVIEW
Raibeart McGregor is just looking for the one and has only one question for any lass that he comes in contact with..Will you marry me. Some of the family think he has lost his mind but there is a method to his madness he knows his true love is out there somewhere but he just can't find her . Until the day the nightmares he tries to run away from start to chase him when he is awake . When he puts two and two together the woman tormenting his dreams is the one woman who captured his heart . Katherine is locked away in a magic prison for so long she just wants it to end . She remembers that she once loved a warlock but even that makes her sad until the day the walls of her prison start to crack. Now she has the decision to go and have the second chance at love or will that love be the cause of all her suffering.
Ok if you are familiar with the McGregor men you will know about crazy uncle Raibeart . He has always been in the back ground . They may call him crazy but he has been hurt and just wants to have a love of his own . He truly isn't crazy he has been haunted by a past and a woman who haunted him . He is so much fun and he is one of the more  Katherine well she is a tortured soul and she just wants to end it all but can't until Raibeart came crashing into the prison she was in . These two are such a fun couple and I have never laughed so hard at Raibeart . The rest of the McGregor clan is also back to help figure out what is going on. These characters are so well written and complex .
I was so excited to finally read Raibeart's story .It really gives us an insight of what makes Raibeart tick. I sat down and fell in love all over again with the characters . They are so well written and comples . Each story reads like a movie and the author paints a picture of sexy warlocks and the women who love them . I would read the other books in the series to get a good grasp on uncle Raibeart before you start this book . This is a good series to honestly take you up to halloween . So if you like paranormal romance mixed up with some high jinx check out this series .
Posted by BOOKS TO CURL UP WITH at 8:33 AM