Good morning my peeps tomorrow we start back on reader round up novels . But today I have for you book three in the Gates of the Underworld series , DAUGHTER OF APHRODITE by Hp Mallory and J.R Rain, 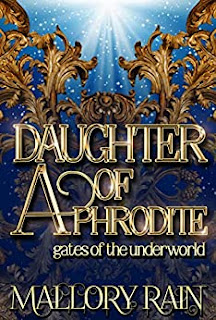 After narrowly escaping Gate One of the Underworld, I find new threats and horrors facing me in Gate Two.

Led by the infamous Fallen God, Ruric, Gate Two is a land of black, onyx mountain and hordes of flying demons.

And Ruric is furious that Azhrea is dead, even though she was planning on wiping him out.

While I hope to defeat Ruric and move to Gate Three of the Underworld like yesterday (I am on a time crunch), I know I’m in for even more horrors.

Take, for example, the white fog that fills the entirety of Gate Three and steals your memories as easily as it hides the deadly wraiths who live inside it.

I can only hope I survive Gates Two and Three of the Underworld so I can find out what awaits me in Gate Four.

MY REVIEW
Welcome back to hell , Pen and Adonis have made it to gate two and defeat Ruric fast  they are on a time line that is running out real fast. Well Ruric is peeved at Azhea cause well she wants him gone . Who knows what is going to go on and well gate three is just well a horror story. Kanto will just not only mess with your body but really screws with your mind . All Pen wants to do is get through the gates and get her mission done and bring her sister back . Will she and Adonis get through  the gates and will they survive .
Penelope really gets put through the wringer in this installment . She is separated from Adonis and well is mentally abused . She is doubting herself and those around her . You know she is stronger then that and she starts to really show it . Adonis is also put through his own personal hell they both are led to believe that they aren't good enough . I am really liking the way the characters are growing and becoming more complex .
This is one of those books that you will devour , the characters are well written and complex and the take on Greek mythology is so much fun to read. The authors are a good writing team and you really get to know the characters well . This is one of the faster reads in the series and you will finish it in an evening . I truly enjoy this series and can't wait to see how they wrap it up . I am hoping for an epic battle for the last book . So if you want a good series check it out .
Posted by BOOKS TO CURL UP WITH at 7:56 AM