Well its Friday and it is also Black Friday . If you are not out getting the good deals and want to stay home I have a really good book for you . ZOMBIES ON THE BLOCK  by Mike Evans . 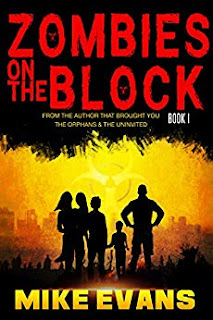 When the flu season struck America it impaired the population crippling what the collected power of the people were capable of doing to fight the outbreak. Unfortunately, it was not the same for everyone. There were three types of people. The first had no diseases, the second had the flu, and the third were busy fostering a zombie virus that was going to bring the nation to its knees.

This story isn't about heroes, there are no guarantees. This is a story about Mike and his family, and what they have to endure to survive. If they want to see another day they are going to need the help of their neighbors and friends.

The situations leaving the main characters in the depths of hell are only outweighed by the comical situations that they get put in. There's no telling what or who is going to survive. Those that survive must fight or flight and in some cases do both. Civilization will be something new when dawn's light falls on the Earth for the second day of the apocalypse.

MY REVIEW
When the flu strikes America , crippling most of the population . There were three types of people , ones that didn't get sick , those that just had the flu and then there were those that well lets just say turned into zombies . There aren't winners or losers in outbreak everyone is a potential zombie . This is a story of a neighbourhood that are going to fight with everything they have . There is no way to know if they are going to survive till next week or even survive the next 24 hours . They may be in the middle of hell on earth but sometimes there is nothing to do but laugh . Will the family survive and find their way around the apocalypse .

The characters in this story are hilariously written . The author has used members of his own family as characters . They are well written and fun to read. Each neighbour in the neighbour hood has quirks and foibles that will have you laughing all the way through the apocalypse . I will have to say my favourite characters and the grandparents . They are funny and they also kick some butt to get to their kids and grand kids . Also another real great character is Holly , Tony's girlfriend , I honestly hope she kicks butt for a long time .

This book is a fun filled zombie book . The author writes zombies with such a flair and in this book he has added more tongue in cheek sassiness.  The story is well written and the characters are well written and hilarious .  I like how the author takes us on a ride from the very first chapter . You honestly feel like you are there fighting right along side of them and you really want them to survive . There are moments that will have you laughing out loud and moments where you will be oh oh run fast . There is one thing I wish the story was just a little bit longer and the characters were just a little bit more flushed out . Over all I really enjoyed this book and can't wait for next book in the series . Check out for your black Friday reading .
Posted by BOOKS TO CURL UP WITH at 7:40 AM