Welcome to the weekend hope your weekend involves some great  reads . Today I am bringing you one of my new favourite authors and her book THE LETTER Dear
Michael ( Unraveled the next generation) by Theresa Sederholt . 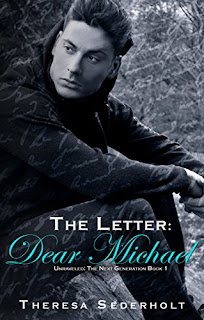 He thought his life was perfect. He was ready to take the next step: get married and eventually start a family. Then, a “Dear John” letter and the unearthing of a deeply buried secret turn his dream into a nightmare.

A product of rape.
A family with hidden enemies.
A bank account with more zeros than can be deemed natural.


Michael’s hope of a life without limitations seems too far out of reach to ever be truly realized. The pressure of family, safety, and secrets is overwhelming. Everyone turns to him, but who can he turn to?

“When you step outside the box, you never know who might want to dance with you.”
DAGEN
Dagen is a type-A personality who doesn’t let her own insecurities allow others to pull the wool over her eyes. However, they have boxed her in, limiting her life experiences.
That is until Michael comes along and tries to convince her to step out of her comfort zone. It’s then that he realizes they have that in common; he needs to step out too.

They both learn that when two hearts are searching for each other, nothing and no one can stand in the way. That is until Michael's life hangs in the balance.

A face from Michael's past might hold the key to his future.
But what kind of hoops have to be jumped through to get that key?

MY REVIEW
This is the continuation of the unraveled trilogy . Michael is all grown up and trying to get his life together .  He has a great job and he was getting married until a week before his wedding he is dumped. With the help of his best friend Bo and his family he heads to the U.S  and a new life . Where he meets and finds his other half in Dagen , Bo's sister and will they realize that they are destined to be together before tragedy take them away from each other .

Ok lets see what can i say about these characters . I love them so much . I have loved Michael from the first series . When he was young . He has grown up to be a kind caring man who is the best of both his uncles and his dad . He is confidant and sweet  also he is also can kind an alpha that will make your heart go pitter patter in so many ways .  Girls you will like him wink wink .
Dagen is well she is such a strong woman , she doesn't take anything from anyone . She has been hurt and has built walls around her heart so she wont be hurt again. She does have her insecurities that she doesn't fit it but what she doesn't know not fitting into that box of what everyone else thinks makes her even more special .  Each of them on their own are great characters but together they are hot .

I was so excited to start reading this book , I loved the Unraveling series . I wanted to see what the author would do with the next generation .  The author didn't disappoint at all . She took the characters and added such a depth to them . The twists and turns will keep you turning the pages.  There are all the characters from the original series .   There are moments that will have you tearing up and then there are the times you will be fanning yourself cause your kindle could be melting . I truly loved this story and if you want to read this story I suggest you read the Unraveling trilogy so you can get to know the rest of the clan before diving in .  Check out and add to your summer reading list .