Well its Saturday all and its hot and humid outside . Today I have a sweet historical romance for you . THE BANKERS BRIDE ( Book 5 in the Whiskey River series ) by Theresa Oliver 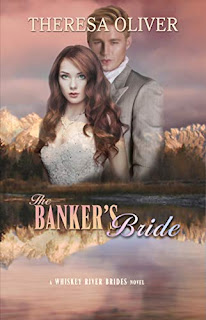 She’s lost everything and wants a new start. He can’t let go of his past… until he meets her. Although both are strong-willed, can they bend their will to the other and let go of the past to let love in?

Megan Shannon is no stranger to struggle. Having lost everything and everyone she ever held dear, she set out from her beloved Ireland to seek a new life in America. When her thirst for a new life lands her in the untamed frontier of Whiskey River, she finds that a free spirit has no merit in her new husband’s home. Emboldened by her desire to be her own woman, Megan clashes against the powerful men who would see her demure and silent.

For Dallas King, Whiskey River is not a safe haven for the bold and the brave, but rather a chance to rise as a powerful man of society. Having left behind a dark and twisted childhood, Dallas sets out to become the man his father wasn’t. In the pursuit of his narrow dream, Dallas finds himself at odds with the beautiful woman he has called to the frontier to be his wife.

An epic battle ensues between what one wants and what one expects as danger lurks close by. Will Megan and Dallas come to terms with their troubled pasts in pursuit of a perfect future? Or does Whiskey River have something entirely different in store for them?

In a battle of wills and wit, danger and desire take the reins as we return to the untamed banks of Whiskey River in The Banker’s Bride.

MY REVIEW
When Megan lost her brother to a senseless fight in the street . She has nothing left, she has know her share of struggles and wants to be her own woman. She has no choice but to answer an ad for a bride . She heads out to Whiskey River to be the bride for Dallas King the banker . Dallas King who is the banker who is fighting a few demons of his past . Will they be able to come to terms with their past and will they open themselves up to love .

The characters are well written and complex , I truly loved the characters in this story . Megan is a sweet Irish girl who has been put through so much . She is sassy and can take care of herself . She is also sweet and trying to keep her heart from getting hurt . She wants to be her own woman but also wants to take care of those that she loves .  Dallas is making a good life for himself on the frontier . He is a good man who is hiding a secret to his past . He has taken it upon himself to have a narrow view on how to be a gentleman. He is sweet and kind with Megan and tough as nails when it comes to protecting her . When something happens to Megan he has a total change of heart and he opens his heart up to all that are around him .  I really like them and Megan i love her feistiness and her love of all things . Dallas one moment you want to hug him and the next minute you really want to hit him with a frying pan. Together they play off each other great .

This is the first time I sat down and read a sweet historical romance and I was hooked . The characters were well written and the story moved really fast . I love the old west and when you throw in romance and gun fights and you have a winner . The author takes us on an epic adventure . I know this is the fifth book in the series but I read it and wasn't lost at all . I am sure you could read it as a stand alone  if you wanted to. This would be a great read for the campsite or the beach . You will love them as much as I do . So if you want a sweet western check them out
Posted by BOOKS TO CURL UP WITH at 11:12 AM