Well it is the start of another hot work week here on the farm . I hope you all had a great weekend . Today I have a book for you that had me in tears through out it . This author usually doesn't evoke tears from me , maybe a little rage when he kills off a character I like but this book had me in tears . THE MUSIC OF MIDNIGHT  by Dallas Mullican . 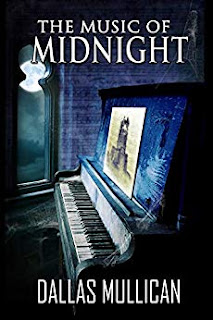 "Existential and profound, dark and beautiful, 'The Music of Midnight' is a tour-de-force." The Black and White Monthly

THE MUSIC OF MIDNIGHT

Born of guilt and grief, a colossal tower rises from the ruins of Andy Cates shattered mind.

He is the sole captive of a prison filled with countless rooms housing the memories of his life. Hoping answers and escape hide within, he investigates the rooms, moving ever upward toward the tower’s pinnacle. Across each threshold, scenes from his past are revealed. As he pieces experiences together, Andy discovers every observed event set another of his prison’s stones into place.

Stumbling room to room, plagued by horrific dreams and poignant memories, Andy longs to reclaim his life and attain a second chance at happiness and fulfillment. The path to escape will bring him face to face with his demons. The enigma of his prison is not easily solved. The tower wants to keep him…forever.

MY REVIEW
This book surprised me, Andy a young man who has been through so much in his life . Knowing that his mother died giving birth to him and his father trying to make him into something he doesn't want to be .  As he tries and work through his grief and guilt a colossal tower builds in his mind . That has been shattered , he is trying to work through the memories of his life . Wanting to put his life back together and have a second chance at happiness . The path to his forgiveness with bring him fact to face with his demons . Will he be able to come out the other end a happy and whole man or will the fortress of his demons keep him captive forever .

Ok I am going to say that the main characters Andy and Darren are written so well and they are both complex . Andy is a quiet musician who is on his way to Julliard . He is hiding a life of guilt that he survived and his mother died giving birth to him . He craves for his dads love , and wants to succeed to get that love . Darren is a funny, lovable oaf , who even though is bullied through out the book, is always smiling and cracking jokes . He loves to read and he is also hiding a big secret . One that according to his mother would send him to hell . They go through so much through high school but always seem to be there for each other . There are so many other characters that are important in Andy's story . The stranger is a figment trying to keep Andy in his tower . Taking him from room to room sometimes taunting Andy . All the characters from his father to Travis are so well written and they all add a layer to Andy's story .

I must say that this author blew me away with this book . I truly enjoyed his other books and this book is a little departure from his other books . The author really dug down deep in his soul to bring us the story of Andy . You just want to make sure that Andy is safe and loved from the very first page he is introduced . I couldn't put this book down I read it in a weekend . The twists and turns had me on the edge of me seat the whole time . I so wanted to save Andy and Darren . I mean what poor Darren had to endure and then what happened to him had me ugly crying cause you know that there are people struggling out there .  There were moments that you just want to wrap Andy up in a warm blanket and hug him tight and tell him that life will be ok.  I love that the author questions religion and what it means to be a good person . This is a gut wrenching read that will have you reading the day away . So if you want a book that will keep you up and have you rethinking the values of life for you today . This is the summer book for you .
Posted by BOOKS TO CURL UP WITH at 1:42 PM