Good Monday morning all , I hope everyone had a great weekend, Today marks the mid mark of summer vacation up here . I know some people are already getting their kids ready for back to school . If you need a book to get them through the rest of the summer I have the book for you . THE ADVENTURERS GUILD  by Zack Loran Clark. 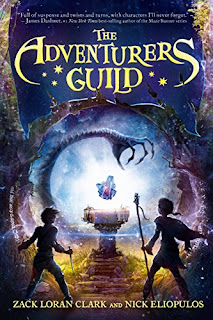 Few ever asked to join the Adventurers Guild. . . . Their members often died young. In one of the last cities standing after the world fell to monsters, best friends Zed Kagari and Brock Dunderfel have high hopes for the future. Zed desperately wishes to join the ranks of the Mages Guild, where his status as Freestone's only half elf might finally be an asset. Brock, the roguishly handsome son of merchants, is confident he'll be welcomed into the ranks of the Merchants Guild. But just as it seems the boys' dreams have come true, their lives take a startling turn . . . and they find themselves members of the perilous Adventurers Guild. Led by the fearsome Alabasel Frond, the guild acts as the last line of defense against the Dangers, hungry, unnatural beasts from otherworldly planes. And when the boys uncover a conspiracy that threatens all of Freestone, Zed, Brock, and their new allies -Liza, a fierce noble, and Jett, a brave dwarf, must prove their worth once and for all. This start of a thrilling new series is sure to be a hit with readers who like their fantasies clever and action-packed, with tons of humor and heart.

MY REVIEW
There are few that join the Adventurers guild , they usually die young . In one of the last cities left standing after they fell to monsters . There are two best friends who have high hopes for the future . Zed Kagari wants to joing the ranks fo the Mages Guild . His best friend Brock Dunderfel wants to joing the ranks of the merchant guild . As their dreams are starting to come true there worl is shifted , they find that they are apart of the Adventurers guild . The guild is led by Alabasel Frond and they are the last line of defense against the Dangers . Will they come out and survive the dangers and prove that they have what it takes to keep Freestone safe .

The characters in this story are well written and each character has his own complexicity to them . Zed is an half elf that wants to belong and do good for his city . He is your typical kid that wants to help out . When push comes to shove he is there for his friends .  He just wants to be part of the mages guild . He didn't really want to be a healer in the Adventurers guild .  Brock is a sweet guy who just wants to be a merchant in the merchant guild like his parents . But like Zed he is thrust into something that he doesn't want to really know about .  Along with their new friends they met in the guild Jett and Liza . They become a strong team that can do almost anything  .

This story is a great read for those of us that love a good adventure . Yes before you start saying but its a children's book . That doesn't really matter the author will take you on an adventure with a group of friends that are doing the best to survive .  There is a great mixture of suspense and humor that is through out this book.  I gave this book to a friends daughter and she couldn't put it down. There are moments in the book where you just want to wrap everyone up in blankets and hold them close and say everything is going to be ok .  This is a great start to a great new series . If you have a tween that is bored , get them this book . They will be lost in an adventure of a life time . Great summer read for those who want a good adventure