Good Sunday every one I hope everyone is having a great weekend . Today I have a fun novella by N.L Hoffmann  THE RAVEN (Cursed by dark book one ) 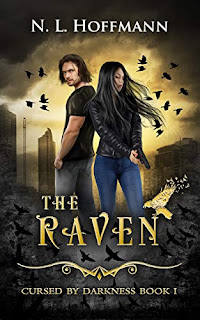 A secret revealed, a fight against desires, and a dark curse.


Megan Argent is an assassin in need of much desired break until she receives information on a target she’s been waiting for. The elusive vampire, Jareth, who’s behind killing her mother, has a price on his head.


Hot on Jareth’s trail, Megan begins to discover secrets that leave her with more questions than answers. Lies are starting to unravel forcing her to work with the vampire blamed for her entire world falling apart. When he begins to help her fight the newly discovered family curse known as the Darkness, Megan quickly realizes there’s a different, more attractive side to the man who hides behind his monster.


Megan’s not sure her and Jareth will be able to come out of the fight alive. Sacrifices are made, but will they be enough?


***This is a novella. This is book one to a series where the following books published will be full size. This story was previously in the Dirty Dozen Vampire Anthology.***

MY REVIEW
Meet Megan Argent , an assassin that is in desperate need of a vacation. Until she finally gets the info that she has been waiting for on a target that she has wanted to apprehend . The vampire that has supposed killed her mother. As Megan tracks Jareth down she begins to discover secrets that leave her asking more questions then getting answers . She now has to ask the vampire she has been hunting for help to figure out the curse that is following her known as the darkness . Will they figure each other out and will they come out the other side of the fight alive . Sacrafices will be made but will they be enough .

The characters i must say for being a novella are so well written . I love Megan so much she is feisty and man can she kick butt .  There is a mystery about her too that we can see start to come out as we read. Jareth well he is a real mystery , at first he seems like the bad guy and you really do dislike him . Like any good character there is more to him then meets the eye . He truly is the character that is hiding something good inside him and such a suave exterior . They are such fun characters to read . I really liked them .

This is a novella that you can read in an hour or two if you want to take your time . The author weaves a tale that will have you on the edge of your seat . The characters you can't help fall in love with them in a short about of time . I really wanted the story to go on . I felt like it just ended way too soon . I can't wait to see where the author will take these characters . I am hoping for some full length novels in this series future . So if you want to read a fun read this is the book for you .