Good Friday all we made it , and guess what it is the end of February also . Well tomorrow is leap year and all is great on the farm .  Today we are going to Willow Valley and the bad boys who work hard and play hard . DAX is book one and STONE is book two written by Shannyn Leah . 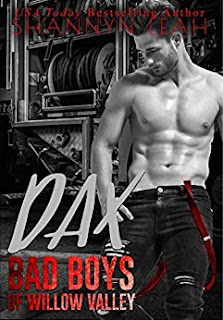 Dax Colyn is one of the bad boys of Willow Valley. A fearless volunteer firefighter and hard working, sexy mechanic, he makes all the woman swoon and he likes it that way. He keeps people at a distance since his mother died. He doesn't want to let anyone in, much less a woman he knows he could fall in love with. Ava Anderson keeps people away, too. Haunted by her tortured past and constantly fearful of the future, it's only her daughter Olivia and Dax's dad Rowdy that she's let in. But when tragedy strikes, it pushes Dax and Ava together, forcing them both to let go of their fears. They soon learn how hard it is to keep pretending and how easy it is to let others in. Especially when those people are family. "Dax" is the first in the "Bad Boys of Willow Valley" series from author Shannyn Leah.

MY REVIEW
Dax well he is a playboy , sexy and smart and just a good guy . Volunteer firefighter and mechanic who loves the ladies but there is more to him .  The one woman that he could fall in love with is off limits . Ava , who is tortured by a past and doesn't want to be fearful of the future . With her daughter and the father that she has known and a grandpa for Olivia , Rowdy is Dax's father is the only man she let in . When the unspeakable happens that brings Dax and Ava together and find the love that they deserve . Or will the past come between them and take all they have away from them

Both the main characters have secrets that are hiding , they are both running away from things that scare them . Dax is your typical playboy that is oh so sexy and he knows it . There is also a kind of sadness in him that you see through out the story . Ava is well she is feisty but also there is stick up her backside and needs to relax a bit . We do see her start to become more well rounded as you read through the story . They are well written and you will love to hate them .

This is a book that you can read in an afternoon while curled up . The story is flows well and you will love the characters. There are a few things that I felt like I have read before . I just found it a little dragging in some areas . Over all I enjoyed the story and the characters are good .  They will make you fall in love with them and you will hate them also at the same time . So if you want a good read that will have laughing and crying this is the book for you 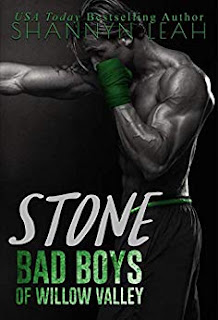 Stone Patino was once a bad boy, but not since moving to Willow Valley. He left that bad boy life behind years ago. Left it in the underground fighting ring he used to call his home. Now, he lives in the country and works on cars. He prefers the simple life without someone trying to put their fist through his face on a weekly basis. There's just one thing about that life he misses.

Bowie Blake was once a bad girl too. But now she's a socialite turned reality TV star who turned her back ten years ago on the love of her life, Stone Patino.

Full of regret and needing help, she seeks out Stone again. She drags Stone back into the ring to fight her battles and save her wheelchair-bound brother. Stone agrees, but must fight through his own demons and his love for Bowie. Both soon learn it's not easy to fight the same battles they'd already fought and lost so many years ago. But now it's a fight they both aim to win.

MY REVIEW
Stone is Dax's best friend and mechanic at Dax's autobody shop.  He left his bad boy ways behind him. Leaving the underground fighting for a life he can be proud of . He is living the simple life with friends and a job he loves . Until a blast from his past blows back into his life and brings him back to the world he left behind .  Bowie pulls him back into the life of underground fights and its not easy to go back to.
Stone and Bowie are characters that you want to love an hate at the same time . Stone is sexy and kind of dangerous in a way that will make you swoon . Bowie well she is one of those women who think they have it under control but when push comes to shove she needs help from the one man who has been there . She comes off tough but honestly she has a big chip on her shoulder when it comes to her family . They are a fun read and you will like them or hate them but they are fun loved them .
This is the second book in the series and I will say I actually liked this book a little more then the first book . The characters seem a little bit more complex and you will love to love them and you will hate them at the same time . The story flowed better also and you feel like you get to know them a little bit more . It could be that I am drawn to more of the underground fighting and what a man would do for the love that did get away from him . This is a book that you can read in an afternoon and yes there were a few spots where it kind of dragged but over all I truly enjoyed this book .
Posted by BOOKS TO CURL UP WITH at 8:22 AM