Good morning all well today is the day before Valentines day . Today I have a sexy book for you with hot alpha men and yes they are aliens but oh lord they are hot . AFTERGLOW  by VJ Lee 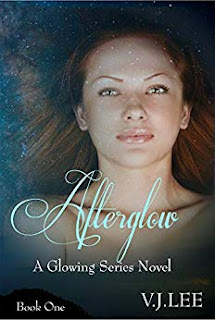 There’s a war raging between the Light aliens and their Dark counterparts. Humans are unaware they are being used for their sexual energy by both sides.
The Dark aliens want to sexually enslave the entire human race, while the Light struggle to maintain the balance between good and evil on Earth. As they fight the never-ending battle to save mankind, they must also fight the battle within their own hearts. Their destinies have been pre-determined by the Fates.
The question is, do they give up their immortality for love?
Aurora is the most beautiful and talented Healer the Light aliens have had in centuries. She can heal even the most devastating wounds with just the Light energy from her hands. But can she heal her own broken heart?
Titus is the fiercest Warrior the soldiers of the Light race has ever had. Trained by the best he is afraid of nothing – but will he fight for love?
Set on a path destined by the Fates, will they be able to change their destiny and be together – or will they forever be alone?

MY REVIEW
When two races of aliens come to earth to wage war . The dark and light have been battling for ever.  The humans don't know it but the forces are feeding off their sexual energy to survive . Between the dark wanting to enslave and the light trying to keep the balance . Aurora is a light healer and she is beautiful but she is hiding a broken heart . Titus is the fiercest warrior and in love with Aurora but they can't be together because of the Fates and the paths they are on. Will they be able change their destiny or will they be destined to not be together .

The characters are well written and I will say that they are complex . Titus well he is strong, sexy and oh so alpha .  But there is a side to him that most don't get to see and that is when he is with Aurora . He has a sweet and kind and so in love he can't see straight sometimes .  Aurora is so sweet and kind but she is also broken hearted and all you want to do is help her out and hug her . As you read her you see her growing stronger and stronger with everything that she goes through . She is put through the ringer through out the book . They are such good characters but when they are together they are such stronger characters . Yes there is a bad guy and man he is really bad . I know he is misunderstood but what he does to Aurora trust me you will want to kill him yourself .

When I started this book I really didn't know what I was getting into but as I started reading I was sucked in by chapter three . The author takes us on an emotional roller coaster ride . The characters are well written and the story line is fresh and will keep you totally engrossed .There is a little bit of a slow start to this book but by the time you hit chapter three you are hooked . There are a few little things that could be tightened up a bit to keep the flow moving a little better but over all it doesn't stop the story line any. Over all I really enjoyed this story and can't wait to read the second book in the series . So if you want a sexy read with alpha men and sweet women .  This book is for you , check it out
Posted by BOOKS TO CURL UP WITH at 7:09 AM