WELCOME TO SATURDAY ALL

Well today is the day after Valentines day or as we call it half priced chocolate day . Today I have for you FORTUNE ACADEMY  year 2 by J.R Thorn 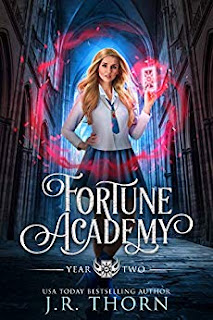 I found my five Virtues… but they didn’t want to be found.
Talk about reluctant. My five Virtues all need to be taught a lesson, even Kaito, my mentor who thinks he knows everything—FYI, he doesn’t.
Hendrik, a dark mage who thinks he’s still pulling the strings.
Logan, a wolf shifter who hasn’t caught on that I’m really his alpha.
Dante, a brutal hunter who doesn’t realize he’s the one being hunted.
Orion, a playboy demigod who hates that all he wants now is me—and no one else. He’ll be the hardest of all to break.
The tables have turned and there’s a monster loose in Fortune Academy (hell yeah, that’s me, by the way). A year has passed on the outside, but it’s only been a few short weeks for supernaturals who are ramping up for Fortune Academy’s big exam. This is a test of our fortitude and our powers unlike any we’ve had before. The Third Echo of Calamity is on its way to Earth and I need to be ready for it, which means I am going to need my Virtues on my side.
I feel them in my soul and have never been more certain of anything in my life. I’ve called my Virtues to me, whether they are ready or not.
They are mine.
Fortune Academy: Year Two is the second book in an upper YA/NA paranormal academy series. The heat kicks up in this Bully Reverse Harem Romance where there are five guys and no choosing required!

MY REVIEW
Welcome to year two . Lily is trying to get her virtues to come to her but man those boys are stubborn, Orion the demigod is well he is just being arrogant and doesn't want anything to do with her neither does Dante and Hendrik well they are trying to pull strings and run the other way . Then there is poor Logan a lone wolf how doesn't want to be alpha and is trying hard not to mate with Lily . There is something nasty on the horizon and Lily needs her virtues to stand beside her not run away or try and control her. The third echo of Calamity is on its way and she needs all to be strong . It is time to take her virtues in and show them who the real boss is . Wish  her luck

Well this story is way more intense then the first books . Lily is growing stronger with each passing day and she knows that there is something coming for her .  She is growing more and more and we see her really start to come into her own . She is starting to realize that she needs each one and is so sorry that she has hurt them . The guys need to get over their pride and realize that Lily needs them as much as they need her . Logan the lone wolf is the one I love he is going through so much and I just want to hug him and let him know things will be ok . Orion well he is an arrogant demigod that is being brought to his knees  by Lily and he pushes back so hard . Then there is Dante a hunter that well he just a sexy alpha who really needs to be brought down a peg or two . They are wonderful characters that are growing with each book,

Ok now this book was a good read . I will say right now there is a lot more sexual content in this book . The author takes us on a rollercoaster ride and trust me you will be sucked in by about the third chapter . I like that the author puts them into the action more in this book and there are a lot more sexy scenes also  so this should be read by older teens . Cause there are a couple scenes that will melt your kindle . Lily and Orion for one . Oh Orion is so sexy and just reading him will have you blushing. There were a few things that just had me wondering , it seemed slow again at the beginning and then it was lots of sex and then the big fight. I wish the author kind of spread it out just a little more and tightened up a couple of chapters . Over all I truly enjoyed this book and can't wait to see what happens in book three .