Good Thursday all , yes it is Thursday I checked my phone. Today I have book 3 in The Happily Never After series . ARIA  by Plum Pascal 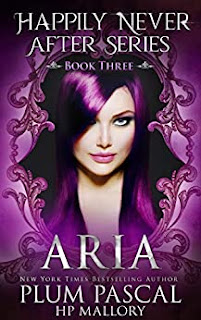 Finding a human adrift after a vicious battle with a kraken, Aria breaches her banishment to save the brave pirate, Captain Hook.

Though Aria knows she has no business involving herself in human affairs, she can’t help her attraction to the roguishly handsome pirate with a silver tongue, a body riddled with muscle, and a mouth made for sin.

Aria’s life is quickly uprooted when her aunt announces that in order for Aria to reclaim the throne from her cruel father, King Triton, she will need allies. And, in this case, allies = marriage to a man she doesn’t even know, Prince Andric.

Meanwhile Aria’s heart and body belongs to the legendary Captain Hook, a man who teaches Aria the very meaning of desire.

The seas continue to rage, with new and violent monsters creeping from the deeps to attack at every turn. Accompanied by her devoted friend and bodyguard, the incredibly handsome merman, Bastion, Aria must face the man who brought her to ruin and threatens to destroy everyone she loves.

Can Aria make it out of the battlefield with her life and loves intact? Or will her heart be just another casualty of war?

Find out in the third book in the Happily Never After Series!

MY REVIEW
Aria saves a human after a battle with a Kracken , she puts herself in danger to help this man out which will lead her into a battle for her life and the lives of those who love her . Will Aria and the men who love her be able to save the sea and let Aria weild the triton and become the true ruler of the sea . Will  they come out of this battle with their lives and love entacted .

What can I say about these characters , we have a devilishly handsome pirate , Hook who is very much a rogue , but he also has a heart of gold . He is very troubled by his past which we get to see his pain. Andric is the handsome prince that is smitten with Aria and has a warriors heart . He is also so good looking he will make you swoon .  Bastion I feel is the most innocent of all the men that love Aria . He is her best friend and a battle ready merman . He has been with her since she was young . He is so sweet and kind but also ready and willing to put his life on the line for the people he loves .  Aria is fierce fighter against those that hurt her and her family. At first when she hits land, she comes of as very naive and oh so innocent . As she meets everyone she becomes stronger and more mature . She still has her innocent moments but over she is a complex girl that will kick your butt and then kiss you  Kassidy and the werebears are back to help out Hook and the guild .

This is the third book in the series and I will say it was a good read. The author does a good job on the twists and turns that come up . The way the author puts in some hilarious moments like when the topic of copulation comes up and they have to explain it to Aria . She is a full grown woman but also so very innocent . There were just some areas that i just felt that weren't that strong and kind of in my opinion just dragged a little .  The ending just didn't feel like an ending its like a continuation into the next book. Over all i did enjoy the story and love the writing of this author . I can't wait to read the next book in the series . I love happy endings.