WELL I THINK ITS WEDNESDAY

Good morning my lovelies who is everyone doing on the day 5 trillion of self isolation . Today I have a new author for you Isaac Roman  and his book ALPHA SPIRITS, 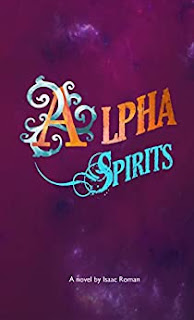 Daniel Twist, a young boy in Indiana bids farewell to his father and older brothers who go off to military training while under the care of his guardian. A week later he starts to hear strange noises up in the attic and like any other curious kid he goes to investigate what is making that racket. Unexpectedly he finds a secret room in the attic that hides an old ornate box that rests on a table ominously. A letter attached on the box tells the reader he will be granted power like no other could ever wield if he wishes to be gifted with the power of Alpha. However opening the box will also unleash a terrible catastrophe whoever opens the box.
Our naive friend did not heed this warning seriously, by this he unleashed evil spirits into his world. Now it is his duty as a spirit tamer to capture and cleanse any Alpha spirit he sees before they destroy the world in their power.
Daniel must capture all the spirits of Alpha before his father returns home, for the curse called the Mark of Agony prevents him from anyone else from interfering with his mission. Otherwise, the Alpha spirits will target those who get in the way of defeating Daniel by terminating them in the name of Sin.
During his binding journey he discovers secrets about his father’s past that may change his life worse than what his main goal to fending off evil spirits.

MY REVIEW
After saying good bye to his father and brothers while they go off to military training . He is put in the care of guardian .  While he is there , Daniel hears noises coming from the attic . So he does what every kid would do is investigate . When he stumbles upon a secret room and an ornate box , which he opens and lets loose evil spirits  called Alphas . Now he has to find the spirit trainer that is hidden inside of him to recapture all the alphas before his dad gets home .

This story has quite a few characters. Daniel is a sweet geeky kid who is really nothing like his dad and brothers . He is a typical kid that just likes being a kid . When you see him start to catch the Alphas you see him grow up and become a really fun character to read . His band of friends are a great mixture to have a friends and alpha fighters . The characters are well written .

This is a really big book that will take you some time to read . the author takes us on an adventure full of twists and turns that will have you on the edge of your seat . This is the first novel for this author and I will say it was a good read but there were areas where the author kind of went off a tangent that seemed a little awkward .  i also think this book could of been split into two , i just felt that it was too long and seemed to move a little slowly at times . Over all i did enjoy the read and the story to me has a Beautiful Beasts kind of feel to it . The one guy letting go of the evil and then having to catch them . Over all i did enjoy the read and would like to read more from this author .
Posted by BOOKS TO CURL UP WITH at 8:18 AM