OK I THINK ITS THURSDAY

Ok I think it is Thursday  I am so lost but oh well I hope everyone is staying safe and sane . Today I have a hot little novella for you  HOW ABOUT NEVER by Leela Lou Dahlin. 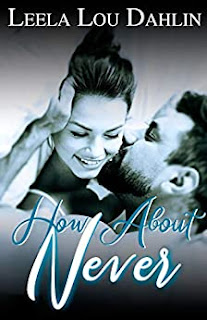 Tempest Sure has a reputation. Not only is she an interior decorator who is a shooting star, but she also is a sexy woman who likes to play but doesn’t like to stay with one partner for too long. There is a man who’s caught her attention, Architect Zane Calder, and since he has a rep like hers, she thought they’d be well matched. Too bad her friend mixed it up with him. Tempest had her rules, and playing with her friend's leftovers was a definite no-no. Until her friend asked her for an unthinkable favor.

Zane Calder had been intrigued by Tempest Sure for years, but when he finally approached her, she told him he’d wronged one of her friends. It wasn’t quite a misunderstanding because he’d explained his rules to each and every woman he invited to his bed. Then came the kicker. Tempest boldly told him she was going to teach him a lesson. A lesson about love? Bring it on. When would it work? How about Never.
MY REVIEW
Tempest Sure has the reputation as being a player . She is on the fast track to becoming famous but doesn't like to be with one man too long.  Until Zane Calder walks into the picture , he has a reputation like hers . But she has one rule she will not play with her friends leftovers .  Until the day that they are going to teach each other a lesson on love . Will they realize it before its too late . That they just might be made for each other .

The cast of characters in this little novella are ok .   Tempest is a hard working play girl who just doesn't want a relationship. She is is feisty and hard working woman . I will admit though she did kind of get to me at times I was kind of annoyed with her .  Zane is a player and he knows it .  He is also somewhat arrogant when it comes to the women he  beds .

This book starts off as a revenge sex book to an forever love book by the end of the novella . The story is different as it was a playgirl who doesn't want the relationship and in walks the man who might want to change her . The story has twists in it that will have you going wow .There were a few spots that seemed to drag a little but over all i enjoyed this hot little novella.  This novella can be read in an afternoon  and it just might melt your kindle and make you blush .
Posted by BOOKS TO CURL UP WITH at 2:25 PM