Good Saturday all , today I have a new author for you and she has written a mermaid book . ISLA EMERGED  by Deidre Sequeira 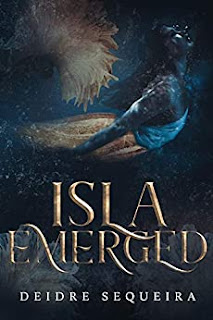 Anger. Betrayal. Exile.
Isla always knew she would be queen. One day. But after the death of her mother, matriarch of the Southern Pacific merfolk kingdom, that day grew much closer than she was prepared for. Worse, to become a mermaid queen, she must marry. It is the only way to protect her kingdom.
Forcibly betrothed to her childhood friend and father’s fiercest warrior, Isla is desperate for an escape—no matter the cost. But until she marries, her father is filled with a power his body cannot handle, and his control is steadily slipping.
After an explosive fight with her father, Isla flees to the surface, only to find herself in the middle of a violent storm with two choices: swim to safety or save the human man she sees drowning in the tumultuous waves.
Her decision will change her life, as well as her kingdom, forever.

MY REVIEW
Isla always knew that she would be queen but when her mother dies that day comes closer and closer . With an arranged marriage to her childhood friend who really doesn't want to marry her but will out of duty . Isla is desperate to escape the clutches of her father. She heads to the surface where she saves a drowning man but that man is not as good as everyone thinks . This changes her life and the lives of her friends forever .

This story is based on the little mermaid story but there are things that are totally different . The main characters are well written . Isla at first comes of kind of like a spoiled brat . She is just is doing everything in her power to prove her point to her dad . As we see her through out the book we really get to see her grow and become a strong woman doing what needs to be done to help her friends and save them .  Allister is the young man who is fierce and will do what needs to be done even marry the princess even though he is in love with Isla's best friend .  There are so many diverse characters that keep Isla busy  fighting for her kingdom.

This story is a good twist on the little mermaid story, the characters are well written and you tend to get sucked into them and like them . The author has a way of writing that can suck you in and then keep you on the edge of your seat for most of the story. The only thing that kind of had me stop it just seemed a little bit slow at the beginning and I didn't connect with Isla but as i was reading more into the story I got into the characters and really started to care for Isla and the rest of them . Overall I really enjoyed this book and can't wait to read book 2 . This would be a great book to read by the pool or at the beach . So check it out
Posted by BOOKS TO CURL UP WITH at 1:47 PM