Good morning my lovelies , its going to be a scorcher here today on the ranch . A great day to have a good book and a tall glass of iced tea and settle down and read . Todays book is by Matthew Cox and his series EVERGREEN . 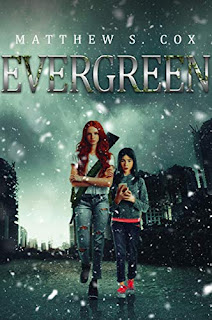 Harper Cody used to worry about the SATs or a getting a new laptop for Christmas… but now, she only wants to keep her little sister alive.
At 5:59 a.m. early in September, life as she knew it came to an end with a nuclear flash ninety miles away in Colorado Springs. For two months, her family sheltered in the basement of their home, surviving on whatever canned goods Dad could scavenge. Passing evacuees told of a safe haven in the mountains, but her father refused to leave. He thought their home was safe… until a gang of looters kicked in the door.
Four years ago at thirteen, Harper won trophies for competition shooting, but killing a man pointing a gun at her is nothing like nailing targets at a range. Hesitation cost her parents’ lives. With no other options, she grabbed her little sister and ran away from the only home she’d ever known into a world she no longer recognized.
The promise of safety in Evergreen gives her hope, but unless the girl voted sweetest in her class can find the nerve to kill, Harper—and her kid sister—are as good as dead.

MY REVIEW
At one time poor Harper just wanted to get good grades and get a laptop for Christmas until the day the world ended and her parents are dead .  After a nuclear flash has ended the world and being in the basement of their house with their parents . They now must leave and find the safe haven of Evergreen . With her fathers shotgun and her little sister they are off, they have to travel miles and miles to get to safe haven . She has to realize that she isn't the little girl anymore and she will have to man up and maybe kill someone who is harming them if they want to stay alive .

Harper and Maddie are the main characters and they are well written and complex. Harper is a seventeen year old who just wants a laptop for Christmas and her parents back . She is tough but also sweet . She can be tough when she has to be but all she wants to get her and Maddie to safety.  She is just a kid though with the weight of the world on her shoulders . Maddie well she is basically in shock through out the book . Her cell phone is her life line even though it doesn't work. She is basically a walking zombie and I guess you can say she is shell shocked . We do see a sweet girl underneath it all and she does become more animated when they finally meet the other members of their rag tag band . All of the characters are well written and you will fall in love with them .

This story is one of what would happen after a nuclear attack . What would you do and how would you survive. The author takes us on an emotional rollercoaster ride that will have you reeling and on the edge of your seat . You really start to feel for the characters and you really want to see them succeed in their journey . There are moments you just want to wrap Maddie and Harper up in a warm blanket and tell them that everything will be ok and then the other moments you want to smack them both and say wake up. There are a few spots where the book just kind of dragged but over all it is an enjoyable . This would be an epic series that would be a great summer read . This would be a great book for any fan of apocalyptic stories . Check it out
Posted by BOOKS TO CURL UP WITH at 8:09 AM