Good morning all I have the second book in the Fated Mountain Wolf pack series . CLAIMED MATE  by Jessica Aspen 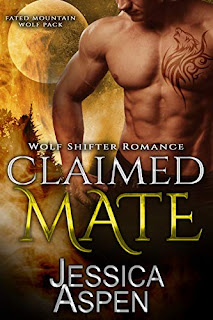 Mistaken identity. An accidental kiss. And the mating fever begins…

When the sexiest woman alive walks up to Gabe and demands to make love, he knows he's met his fated mate. But will falling head-over-tail for Serena turn out to be the biggest mistake of his life?

Serena’s move to Colorado isn’t going as planned. Her new boss hates her. She’s falling in love with the wrong twin. And a stalker is sending her roses.
Now both brothers are suffering from mating fever but only one man is Serena’s fated mate.

If Serena can survive the obsessive love of a stalker one brother will have the mate of his dreams. And the other—a chaotic fall into the wild…

Discover your new pack—Fated Mountain Wolf Pack...
Come to Colorado where the rivers run cold and the alphas run hot!

Choosing between lovers isn’t the way I want to start my new job—neither is being stalked.
Standing in the tall grass was a gray wolf with brown highlights. He saw her and shifted…
Her heart jumped.
Sam.
She’d been thinking about him, daydreaming about him, and now she had the opportunity to see if what they’d had that one night was real.
She stared for what seemed like five minutes, but was probably only seconds, while her heart skipped in her chest and logic fought with desire.

He’d cut his hair almost brutally short. She wasn’t sure how she felt about that. It gave him a leaner, almost military look, accented by the enforcer tattoo on his shoulder—a FM topped with three stars. She couldn’t spot his other tattoo, and for a moment she wondered if she’d been confused, did he really have one? But his bright blue eyes sparkled in the sunlight and a wicked grin crept over his face. Her thighs began to shake.

Suddenly—missing tattoos, responsibilities, her crappy day—it all disappeared in a fierce rush of need.

She stepped off the path and into the grass. This was meant to be. She’d started the ball rolling, taking big risks with her life, moving, getting a new job, leaving her pack. Now she was about to take another. She was going to sleep with Sam Wulfric.
For Sexy Shifter Romance that you can’t put down…Buy CLAIMED MATE today.
Fated Mountain Wolf Pack...Come to Colorado where the rivers run cold and the alphas run hot!
*****

MY REVIEW
When Serena comes to work for the pack she runs into the man who is fated to be her mate but there is more then just one man she has to worry about . When she walks up to Gabe and demands to make love with her , her world changes well because there is mistaken identity and will Gabe or his twin brother Sam win out .

This is the second book in the series and the characters are just as complex as in the first book . Serena is a no hold bars woman , she is feisty and sweet but also can stand up to anyone . She is also a dream walker , and shifter she can only shift in her dreams . Both Sam and Gabe are tall, sexy and oh so alpha . Sam is a little bit more on the cocky side and Gabe is more on the sweet side . I like Gabe more then Sam cause Sam just seemed to be kind of arrogant in so many ways . There is also a stalker that you will want to slap a few times . These characters are well written and complex .

This is one of those books that you get very involved in , you get to fall for the characters and cheer for them when they finally get together . The author takes us on a rollercoaster ride just on the fact of who is she going to pick. The story is well written and the characters are complex . There is some intrigue and a whole bunch of romance and a whole lot of alphaness . This book could be read as a stand alone but I would say read the first book in the series so you can understand the pack a bit more . This is one of those books you can read at the beach or by the pool . So check it out
Posted by BOOKS TO CURL UP WITH at 7:55 AM