ITS TIME FOR SOME MAGIC AND MAYHEM

Good Thursday morning all or as I like to say its Friday eve . Today I have a new series for you by HP Mallory . This series is kind of different it is in episodes and will be out monthly . So let me tell you about SHADOW PHANTOMS . 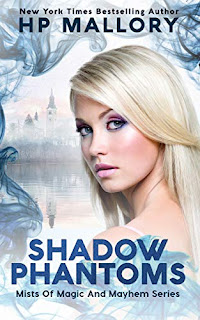 Welcome to the sexy world of magic and mayhem—of witches, vampires, fae and lycanthropes.

This episodic, monthly fantasy romance series features all the characters you know and love from the New York Times Bestselling Jolie Wilkins series.

The order of the Underworld is no longer…

Where once factions of creatures—vampires, witches and warlocks, werewolves and fae—all came together, united under the banner of Queen Jolie, now those factions are separate and vying for control.

The vampires, unified under the authority of Master Vampire, Sinjin Sinclair, are living a life of hedonistic opulence aboard three cruise ships on the open water. Sinjin, bemoaning the loss of his one true love, can find little interest in anything else. But there’s a threat on the horizon, and one which will force Sinjin out of his melancholic lamenting…

Meanwhile the witches and warlocks have been separated into two factions: The King’s Alliance, commanded by ruthless High Mage, Duine and The Order of the Templar, a band of rebels, led by Pagan. While Duine seeks to control all witches and warlocks, subjecting them to his tyrannical rule, Pagan wishes to return magic to the hands of the people.

Amid the chaos of attempted assassinations and battle, is Emma Balfour. Now seventeen, Emma is attending the highly prestigious Elmington Academy—a school of magic. Unlike her witch mother and warlock father, Emma is anything but magical and finds her time at Elmington a struggle. That is, until she meets enigmatic Stone Draper. Stone is handsome, young and charismatic and Emma finds herself immediately taken with him. There’s only one problem… Stone Draper is actually Professor Draper, Emma’s instructor.

Find out what happens in the first episode of the Mists of Magic and Mayhem series!

MY REVIEW
Welcome back to the underworld where now it is chaos . After Jolie goes missing there is a fallout and everything is in chaos . Duine wants to control the witches and reign with an iron fist an Pagen wants to give the power back to his people . The Vampires are under Sinjin's rule. Queen Jolie is nowhere to be found and Rand has just gone . Emma is at a prestigious Elmington Academy . She is having a hard time at school cause her magic is just a little off . Until she meets Stone Draper the sexy new teacher  and things start to change .

The characters you loved from Jolie series are back but they aren't the happy family they once were . Emma is now seventeen and trying to get through school . She is feisty and sweet but she is also kind of lonely and a little lazy the typical teenager . But she has two best friends that really help her out . Stone Draper is wow  he is sweet and sexy but also he has an alpha vibe going for him . He really gets under Emma's skin in a good way . Brynn and Sinjin are back along with Rowen . They are always such to read .

This book was such a surprise to me , I was like woohoo the author is continueing the story. Thinking that we are going to see into everyone's happily ever after, well I was wrong on the happily ever after . But of course the author had other ideas and we get to meet new characteres and fall in love with them as much as the original characters . I love the premise of this series , it is written in episodes and will be out monthly . I really like this idea it will keep the series fresh in your mind as you read .  This is going to a great series and I can't wait to see what happens through out each episode . So if you want a great series for the summer check it out . I promise you don't have to read the original  series to like this series .
Posted by BOOKS TO CURL UP WITH at 7:51 AM