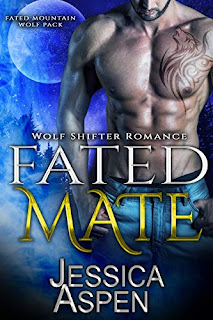 I've been abandoned. Left on the side of a mountain road with a Rocky Mountain storm on the way and the only person I can turn to is a stranger—but Aaron has his own secrets...
Gwynn swallowed hard. “Hey.” She hovered on the side of the road, unsure of what to do, now that she’d gotten his attention.
Gray eyes started at her feet, taking their time as they traced up her body, tracing danger up her spine.
He was bigger than she’d thought. Close up, he looked hard and hungry. Well over six-foot, with slightly curling black hair, a scruffy three-day-old beard, and a silver stud in one ear. But this was no Pirate Jack. This man was all hard, bulging muscle under his tight, white tee-shirt and jeans—definitely more lumberjack than pirate.
He finished his examination and finally met her eyes. Her panting breaths were suddenly shorter. Her gut said ‘back away- danger! Danger!’
But this danger wasn’t the kind she was familiar with, growing up on the edge of the seedier side of town. He wasn’t a street thug or a pimp. She knew what those people looked like, smelled like. She’d seen enough of them, when her dad drove them into the neighborhoods her mom struggled to keep them out of. This man felt like a different kind of threat.
He had a stillness about him. The kind that said he would move in an instant. The kind that would come in handy if Herb’s buddies showed up. The lethal kind.

MY REVIEW
When Gwynn is left on the side of the road on a mountain pass . She has to rely on the help of a man that she doesn't know but wants to . Aaron is an enforcer for a loan shark but he has some secrets to why he is working for them . Together they have to fight for what they want and the love that is brewing between them and will she believe the truth about Aaron and his life .

Well what can \I say about Aaron and Gwyn . Aaron is well he is a sexy, brooding and a shifter who has been working to help out his pack. He is oh so smoldering you will want to take him home and really have fun with him . hehehehehehhe. Gwyn well she is at the beginning a little whiny and kind of annoying but as you read she becomes stronger . She really comes into her own once she gets to the ranch. They are good characters on their own but as a couple they smolder .

I truly liked this story , the characters are so well written and complex . The author takes us on an emotional rollercoaster ride that will have you on the edge of your seat through out most of the book .  There is a intrigue and lots of romance and some scenes that will make your kindle melt .  This would be a great book to read at the pool or out enjoying the sun . So if you want a sexy read that will have you reading till late in the night check out the Fated Mate .
Posted by BOOKS TO CURL UP WITH at 1:47 PM