BOOK TWO FOR READER ROUND UP

Good Saturday morning peeps , I have for you book two for the reader roundup . Today's book is from an author that I have read quite a few books from  THE SUMMER THE WORLD ENDED  by Matthew S Cox. 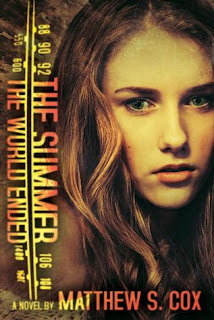 Riley McCullough thought her best friend getting ‘dragged’ off to Puerto Vallarta for the first two weeks of summer vacation was the end of the world―at least until the bombs fell.

Life in suburban New Jersey with her mother is comfortable, not to mention boring, to an introverted fourteen-year-old. As if her friend’s surprise trip didn’t suck enough, her ‘best summer ever’ falls to pieces when she’s sent across the country to stay with a father she hasn’t seen in six years.
Adjusting to a tiny, desert town where everyone stares at her like she doesn’t belong proves difficult, and leaves her feeling more isolated than ever. To make matters worse, her secretive father won’t tell the truth about why he left—or what he’s hiding.
Her luck takes a turn for the better when she meets a boy who shares her interest in video games and contempt for small town boredom. Alas, her happiness is short lived.
To escape nuclear Armageddon, she shelters with her dad in a bunker he’d spent years preparing. After fourteen days without sun, Riley must overcome the sorrow of losing everything to save the family she still has.
MY REVIEW
Ryley is your typical fourteen year old girl , wanting the best summer of her life before heading off to high school . She wants to play video games with her best friend Amber and have the time of her life  Well that is short lived when her best friend is whisked away to Mexico for two weeks , she thought she would be die . Well then her life gets totally turned upside down when her mom passes away and her father shows up to take her home with him. A father she hasn't known for ever , what could happen right . Well in a desert town isn't all that it is cracked up to be, feeling isolated and lonely she tries to adapt but when her dad falls off the deep end and thinks the world is being destroyed. They end up spending two weeks in the fall out shelter while the world was going on around them . Will Ryley find out the truth about what is going on in time to save her dad and get back to life with friends .
Ryley is your typical fourteen year old and she wants to grow up but also wants to stay a kid . After her mom dies she does do a lot of growing but first she really does some moping around at the beginning . She is a strong , tough girl who just wants to belong somewhere . There is such a big cast of characters that help Ryley out along the way . Keiren her friend and boyfriend who is a local boy , he is sweet and humble . They are really sweet together . Her father well he seems like he has everything together but we soon find out that he doesn't and he is a little on the loony side . Each character is well written and complex .
Ok I am going to admit something here when I started reading this book I was kind of confused. This isn't like the rest of the books that this author writes . I was thinkin that this was a teenage angsty book . Which in a way its was in a way but then the twist about half way through had me going oh wow this is sounding more like the author . Oh don't get me wrong I was hooked by the end of chapter 2 and loved the journey the characters took but it was kind of a departure from the authors other stories .  So if you want a good story that has some great characters and some good twists check it out
Posted by BOOKS TO CURL UP WITH at 7:12 AM