This is my second post of the day and this one isn't included in the reader round up . I have a special book from one of my new favourite authors . Hannah Bryon and her new book THE NORWEGIAN ASSASIN ( A Resistance girl book 4) 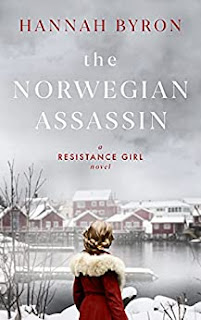 Her family’s gone. Her fiancé taken from her. Esther Weiss sees only one way to fight back.

Life is good for Esther and her Jewish family until Hitler annexes their home country Austria. Her wedding to fiancé Carl Bernstein is postponed, and her family's entire life is uprooted.

Thinking they’ll be safe in Oslo, the Weiss’s hope is short-lived when Norway is invaded in 1940 and the fascist Quisling Regime is put into place. Esther returns home one day to discover her entire family has been deported. Gone. Without a trace.

Something snaps inside Esther. The soft-hearted, gentle girl is no longer. Her desire to fight the enemy becomes her only drive. She joins the Norwegian resistance movement and with her blond hair and light eyes, all it takes is a false passport to give Esther the freedom she needs. The freedom to kill. No German or Norwegian fascist is safe when she’s nearby.

Destruction of those who took her family gives Esther a license to live, but it has also hardened her heart. Not even Tore Helberg, her rock and protector in the Resistance movement, is able to break through the walls she’s placed around her heart.

When all she loves is gone, and only hate remains, can the Norwegian Assassin reopen her heart and find love again?

Esther is a young Jewish woman with the world by tail . She had a great fiancé and her family was happy . Until the day that the Nazis started to invade and things went horribly wrong . She is sent of  to finishing school and when she gets home her family is gone without a trace . They just vanished deported to heavens know where . Something snaps in Esther and gone is the gentle girl that wanted the world . She joins the Norwegian resistance fighters . All she wants is to find her family and revenge for those she lost . With her heart hardened she goes about helping the resistance . Her heart is hardened and she doesn't know if she can ever love again . Not even her rock can break through the ice . Will she be able to find love again or will she be hardened to love forever .

Omg this is one of those books that you fall in love with the main characters from the very beginning . We met Esther in book three and I loved her feistiness from then and in her book her strength is amazing . She is one tough cookie and you know you want to be her when you grow up . Tore Helberg well we first met him he was just having a fun ski retreat . We didn't really get to know him until we find him fighting for the resistance . He is strong but he does have a sweet side when it comes to Esther. There are so many different characters that you will love in this book . They are are so well written and complex .

This is one of these books that you don't have to read the other books to know what is going on .  I sat down and read this book in a weekend , I couldn't put it down the author took me on an emotional roller coaster ride . There were moments where there were tears rolling down my cheeks . I love how the story is based during World War II and the author paints a vision what what it would be like back then .  I am truly loving the writing style of this author and will read more from her . So if you like books with history , romance and tough female characters . Check it out I promise i will not be disappointed .