WE MADE IT TO WEDNESDAY

Well the snowmageddon is done but now it is minus 40 C out on the ranch today . So yes i settled down and started reading HELL TO PLAY , chasing demons book 2 by J.R Rain and Hp Mallory 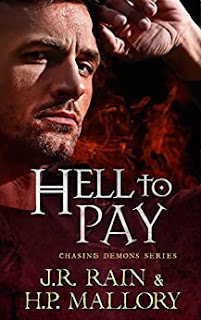 Graham Kincaid is back! Next in the epic demon hunting series from #1 Amazon Bestseller, JR Rain, and New York Times Bestseller, HP Mallory!

Graham Kincaid has been hard on his luck ever since getting kicked out of Heaven. He’s still an angel but he’s been relegated to Earth and now works two jobs.
The first is as a bounty hunter, running down demons escaped from Hell.
And his other job? A pet detective.
When Graham comes across a crazed man who keeps screaming about his dreams being ‘stolen,’ Graham wonders if a sleep demon is on the loose. Unfortunately for Graham, he can’t question the crazy guy because he’s dead.
To make matters worse, there’s also a centuries-old spirit of a berserk Mongolian warrior terrorizing New York City.
And try though he is, Graham can’t stop thinking about the last woman he dated for oh, a minute. Short though their courtship might have been, Sierra left a lasting impression on Graham and when he finds himself back on her doorstep, he can’t say he’s surprised...
Between escaped demons, angry warrior spirits and affairs of the heart, Graham’s having one hell of a day.
MY REVIEW
Graham is back and on a new investigation from his angel supervisor Claire.   To find Khan a centuries old Mongolian warrior that is running around the city. To top it off Graham ran into a deranged man screaming about his dreams being eaten before he jumps to his death .  All the while trying to forget the woman who he had dated well for a nanosecond but he can't get her out of his mind . Its all in a days work for Graham .
Omg poor Graham he is having such a hard day . He is trying so hard to work on trying to get himself right with God . He is such a tortured soul but he does have a heart of gold . You really want to give him a hug and tell him every thing will be ok . Sierra and JJ are back and there is so much tension between Graham and her. They I feel that they are destined to be together and I really hope they do get together . Graham needs her as much as she needs him . Even if they don't know about it.  They are so well written and complex and you will love them . There are also demons that well put Graham through it . Between Khan and the dream eating demon . It is an action packed day of demon hunting for Graham.
I was excited to get the second book , the first book blew me away with the story and the characters .  So I devoured the book in an evening and was sucked into the story by the end of chapter one . I really like Graham he is so tortured you just want to keep him safe .   I will admit this is a shorter book then the first book but it is packed with so much action will keep you flipping pages all night . There are plenty of twists and turns that will keep you on the edge of you seat . I truly like the way these authors write they can really keep you entertained . So if you want a good series for these cold evenings check them out
Posted by BOOKS TO CURL UP WITH at 2:05 PM