Good morning peeps , now that the reader roundup is over its back to normal here on the blog . Today I have book 3 in the Chasing Demons series by J.R Rain and Hp Mallory . HEAVEN OF HELL . 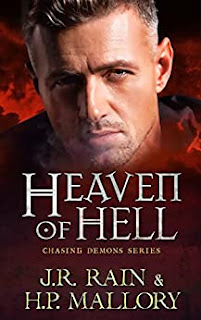 Graham Kincaid, a fallen angel, is settling into life on Earth—he’s moved in with his girlfriend and he’s starting to get a feel for this being human thing.

Graham’s still working odd jobs as a pet detective and an undercover demon hunter, but when the emissary of Heaven lets it slip that the most dangerous of all demons, Legion, has escaped Hell, things are about to get personal.

Graham’s about to face his most important job yet.

Why? Because Legion threatens the very existence of Heaven, itself.

When Graham realizes who is at the center of Legion’s nefarious plan, he’ll have to face ugly truths about his own humanity he’d rather not…

MY REVIEW
Graham is settling in to his life and has moved in with his girlfriend and he is becoming a dad to her son and he is liking it.  He is still working odd jobs as a pet detective and a demon hunter . When he finds out from his contacts that the most lethal demon has escaped , Legion has come to earth and its about to get personnel . When Legion wants to wipe out Heaven and all the angels . Graham finds out he is the center of the plan for the take over . Now he has to face some ulgy truths about his life .
In the final book Graham is back and stronger then ever . He is still tortured but he is stronger in his resolve to make things good again. He is fighting for all of humanity and heaven . He has grown so much and honestly I like the way he is now he is finally coming to terms with everything that is going on . We get to meet Leila someone from Graham's past who is the cross hairs of Legion . We find out a lot history of Graham from her.  These characters are so well written and complex you will love them
This is the final book in the series and I think it is the best one of the trilogy. The authors have really created a great series . The characters are well written and so complex . The stories are intense and well written . This last book is no exception , we get to see a big battle in this one and we get to see some love happening . Like with any good book you will get sucked in by the end of chapter one . I couldn't put the book down cause I wanted to see how it would end but the other part of me I didn't want it to end . I truly love these authors style of writing and I can't wait to see what other stories these authors come up with in the future . So if you want a series that has angels , hordes of demons , and true love check it out .
Posted by BOOKS TO CURL UP WITH at 7:03 AM