WELL HELL HAS FROZEN OVER YET AGAIN

Good afternoon everyone , well I am back to living in the wild and wooly tundra of Saskatchewan . It has gotten cold and blowing yet again .  So I was going down the Tik Tok rabbit hole and found a new author and a fun book . Let me introduce you to THE SORCER'S REALM  by Christopher D. Horton 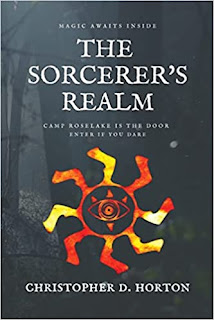 Camp Roselake has been the center of several mysterious disappearances over the past thirty years. Finally succumbing to public pressure, the state authorities shut down the campground for good. One night, a year after its closure, former camp director Wade and local mechanic Steven trespass onto Camp Roselake's grounds for a weekend of hunting and relaxation.

However, Wade has a darker purpose for Steven. Sitting around the campfire on their first night, Wade pulls out a book with a strange symbol on its cover-the Sorcerer's Mark.

When Wade reveals that the magical book holds answers to Camp Roselake's disappearances, Steven demands the book be surrendered to the authorities. When Wade refuses, Steven senses trouble and tries to leave. But Wade convinces Steven it is in his best interest to stick around or else...

In The Sorcerer's Cabin, a young couple, Chris & Hani, decide to enter Camp Roselake despite the recent disappearances of teenage couples just like them. This decision produces the unexpected outcome of spending their entire life learning the world of magic to stop an evil sorcerer and his vile plans.

In The Sorcerer's Ride, Scott is asked to go on a seemingly ordinary mission to estimate a price on a motorcycle for an estate auction. When Scott test drives the mystical motorcycle, it sprouts wings and flies...straight into the clutches of its evil owner. Expecting the worst, Scott finds he has family ties inside the world of magic.

Camp Roselake has been the epicenter of mysterious going on for almost 30 years .After being shut down two friends Wade and Stephen sneak into the campground for a relaxing weekend of hunting and relaxing . When they find a magical book that explains the disappearances . Wade wants to read it but Stephen wants to turn it in to the police . When they finally start reading they find out two tales of Camp Roselake and the ones that have disappeared .

There are two stories in this book with two main characters narrating the book . In book one we have Chris and Hani. A sweet young couple who decide to check out the lake even though they are not suppose to be there .  Chris is a sweet guy who just wants to hang out with Hani and she is the tough one when push comes to shove . They know that they have to find out how to kill the evil that is happening at the lake . They are such a fun set of characters to read . You will be cheering for them all the way through. In story two Scott is such a wonderful character . He is tough but gentle at the same time . He ends up buying a magical motorcycle and heads to find his family ties . When you read him you will have an on the edge of your seat moments and some funny times . The narrators Wade and Stephen are to me like a bumbling set of friends that keep the story moving . They are such fun guys and want nothing more to  tell the stories . These characters are well written and you will find them endearing as much as i did .

This is book that had me flipping pages , finishing in an evening . This is a new author to me and I enjoyed his style of writing .The characters are well written and you really want to care for them as you read the story . There are some really good twists and turns through out the book that will have you on the edge of your seat through out the story . There is one thing I do wish is that it was just a little longer and we get to really dive into each of the characters .  I think that teens could read this book comfortably and get what is going on . So if you want a fun read while its storming out check it out when it comes out .