Today i have a promo book for you . I am currently reading this book and loving it .

THE DEAD OF JERUSALEM RIDGE 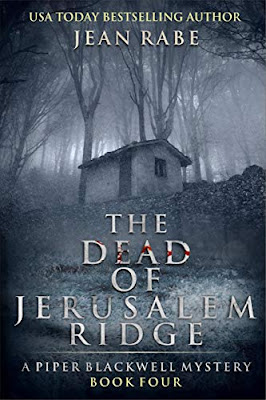 Sheriff Piper Blackwell’s three-day vacation with old Army buddies ends in tragedy. At the same time, a vile hate crime along a county road enrages her department. Their forces divided, Piper and her deputies must solve both cases before tensions boil and threaten the rural fabric of Spencer County, Indiana. Only eight months on the job, the young sheriff must weave together clues to uncover both a killer and a secret that could scar her soul.

"Piper Blackwell is a smart and capable small-town sheriff, a thoroughly modern woman who leads a colorful cast of characters in this entertaining read. Well-crafted and suspenseful, THE DEAD OF JERUSALEM RIDGE adroitly threads the needle between Cozy, Procedural, and Action-Thriller. Jean Rabe's fans⸺both old and new⸺won't want to miss this one.⸺ Baron R. Birtcher, multi-award winner, and LA Times Bestselling author

“Women in the military never get enough credit,” Renegade put in. “I’m not a hot runner like Sheriff Christmas was, but I’ve got my eyes set on making General. I’ll do it. I’m going to make noise about it when I get the star. And today … I’m going to get a couple of kills and make it to the top of the hill first.”
“So, we capture this hill, right?” Piper had her copy of the map on the table, smoothing out the curl and leaning close to better read it. The map was a copy, shrunk down from an original 1820 poster-sized version Spaceman said he got at the library. The hill was one of several in the eastern section. Spaceman’s property, marked in red, stopped at the south where the hills started. It wasn’t easy to read the print. He said he couldn’t find a recent map with this much detail.
“Are we going to be trespassing if we go on the ridge?” Piper was ever mindful of legalities.
“Nope,” Spaceman replied. “Public property. County property, the ridge and five acres on the other side. I go up there once in a while just for the view. People camp on it. An old bluegrass musician was raised somewhere over there in a restored house. Nice little museum nearby. Sells souvenirs.”
“Not into museums.” Hemi took a look at the map. “But I like bluegrass. Okay, that hill. If one of us makes it to the top without dying, we win. Team Alpha has to hold the ground. Brick’s the only one I’m worried about.”
“And if we lose, we have to buy dinner for Alpha tomorrow,” Renegade called from in front of the stove.
“We won’t lose,” Spaceman said. “They’ll be buying dinner for us. We capture that hill, come back here for lunch … beer and smoked sausages. Then we go out for round two, where the stakes are even higher. We have the advantage. I’ve been traipsing this land since I was a kid. I know every inch. If you go past the ridge, you’ve gone too far, blown the objective. So don’t go farther than the ridge. We need to win today.”
Renegade brought plates to the table, the heavy-duty paper kind, and plastic forks. “I do not want to be on the losing side, Christmas,” she said staring at Piper. “You damn well better aim righteously with that cheap gun of yours. I want a free steak dinner with all the trimmings.”
“I want smoked salmon.” Spaceman presented a platter of bacon and a bowl of scrambled eggs dotted with cheese and green peppers. Biscuits and homemade maple butter were already on the table.
The eggs were warm and as tasty as anything she’d had at a restaurant. Piper detected among the scattering of peppers and cheddar a hint of cream cheese. She’d ask Spaceman later for his ingredients and pass them along to Nang. She wondered what Nang was doing this weekend, and wished there was cell reception so she could call him.
“How long did she live?” Renegade asked.
“Huh?” Hemi paused in mid-bite.
“Sybil,” Renegade replied. “What did your history class teach you about her end?”
“It’s always the end with you, isn’t it?” Hemi took a slug of coffee. “Seventy-seven. She was a little over seventy-seven, a long life for back then. There are a few statues of her, I think in New York. Her grave’s a little thing, though, no monument or nothing … and there should have been one. The Revolution might have turned out different if it wasn’t for her.” 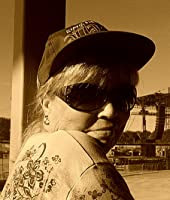 My home is filled with dogs and books. Lots of dogs and books. I wear worn out sandals to work every day. I'm a mystery writer living in a tiny Midwestern town that has a gas station, a Dollar General, and a marvelous pizza place with exceedingly slow service. I am always working on a new project or three. I have forty-some books published in the fantasy, science fiction, urban fantasy and mystery genres. But I'm concentrating on mysteries now. In my spare time I dabble in roleplaying games and boardgames. And at every opportunity, I toss tennis balls to my cadre of dogs.

YOU CAN PURCHASE HERE

My web page: www.jeanrabe.com
I am on Twitter at: @jeanerabe
My Amazon author page at: https://www.amazon.com/Jean-Rabe/e/B00J1QR5U2/ref=ntt_dp_epwbk_1

I have a newsletter filled with tidbits about weird news items, pics of my dogs, discussions of upcoming books, reviews of things I’m reading, and writing advice. You can subscribe here: http://jeanrabe.us14.list-manage1.com/subscribe?u=89364515308e8b5e7ffdf6892&id=9404531a4b