TIME TO BRING IN SOME ALASKA HEAT

Good morning all , I know we are having a heat wave around here this summer but I am here to bring you some sexy Alaskan shifters and a snow storm in MIDNIGHT STORM ( Alaska Alphas  book 5 ) by Boone Brux
BOOK BLURB 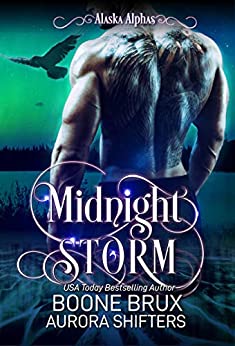 Most days, wolf Shifter, Skye Seward would rather have her head in the air than her feet on the ground. When a snowstorm forces her to land her plane, she finds herself seeking shelter at the lodge owned by her childhood rival, raven Shifter North Johnson. Though they usually can’t be in the same room for five minutes before they start to bicker, her wolf seems hell bent on following him around like a love-sick-puppy.
When Sky shows up in the middle of a blizzard, North isn’t surprised. All her life she’s been wild, but this time her recklessness almost got her killed. Normally, he’d scold her, but what he really wants to do is pull her close and kiss her. With the storm raging, the lodge becomes a haven for stranded travelers, all of them unpleasant, and some more dangerous than the others. As the storm and his feelings for Skye ramp up, he’s not sure what's more dangerous, the threat lurking among the visitors or his burning need to mark Skye as his.
Welcome to the world of Aurora Shifters, where magic comes to life beneath the northern lights, and the wilderness isn't the only place to find fur and fangs.
MY REVIEW
When Sky has to land her plane in the middle of a snow storm , North's lodge is the only place she has to go to get out of the blizzard . She and North have known each other since they were kids and they fought each other every day since then . Unbeknownst to them this night will bring more supernaturals to their door a mystery attacker and the realization that there is more to Skye and North then just being friends .
Ok I have been waiting for book two I really wanted to know what was behind the grumpiness of North since we were introduced to him in book one . He is the middle child and trust me it seems like he has the chip the size of a red wood on his shoulder. There is more to him then his surly personality lets on . He is actually a really sweet guy who would do anything to protect his friends and family . He is tall and sexy and also a really cool shifter I mean who knew that raven shifters could be so sexy. Skye is feisty with an attitude that could knock you over especially when it comes to North . They say opposites attract and boy do they attract . I really love these two , they are such a fun couple and they will do what it takes to keep each other safe .  We also have a group of vampires that stop in and some Eagle shifters that just add to the intrigue of the book . Sabine and Aisling are so sweet as a couple .
This is a book that you can read in an afternoon its a nice fun fast read . The author takes us on a fun filled ride . The characters are so much fun to read and they are so well written . You will love them . Who know that a blizzard could be so sexy , trust me in this book you will find out how sexy it can be . There is also a little bit of a mystery that goes on in too .  So if you want a fun read for the beach check it out it can be read as a stand alone but if you want to find out more you can read the whole series and get on with your Alaskan nights . So meet the men and the woman who will take them and tame them .
Posted by BOOKS TO CURL UP WITH at 7:37 AM