Wow it is the second of July and wee are finally able to move around a bit more but if you are like me you are still at home and staying safe . I a new author to me and her mystery book . THE MEMORY OF TREES  by Gabriella Messina 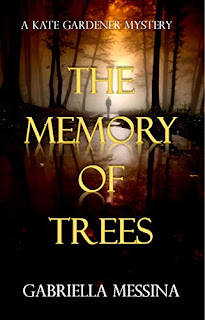 On a crisp September morning, a jogger stumbles upon an horrific scene in a London park...
When forensic photographer Kate Gardener steps in for her injured supervisor, the brash American ex-pat finds herself at the scene of a truly brutal murder. The naked, castrated body of a young pharmacist has been found at the edge of Regent's Park.
Gifted with acute sensitivity and a "photographic" memory, Kate is uniquely suited to capturing the details of crime scenes and seeing what others do not see. Something about this crime scene haunts her, though, and her frustration grows as the investigation proceeds.
After the victim is linked to the sensational decade-old murder of a young woman, and a second equally-brutal crime scene is discovered, Kate has to agree with New Scotland Yard's Murder Squad detectives that there is a definite link between the cases. Then crime scene photos go missing -- and a coworker's strange behavior takes center stage -- and Kate begins to fear that the murderer may be close to the case... and about to strike again.
Kate's instincts for solving crimes have always been spot-on... but finding the truth this time may be more dangerous than she could ever have imagined.

MY REVIEW
Welcome to the New Scotland Yard , where a young crime scene photographer Kate Gardener has come to work . She is the perfect person to work crime scene . She is smart and had a photographic memory. When crime scene photos go missing and men end up dead . She thinks the murderer is closer then she thinks . Will she be able to find out who has killed these men and why they are linked to a past murder of a young woman.

The characters in this book are very well written . I really like Kate, she is smart and sassy. She is perfect for the job because of her photographic memory . She is such a fun character to read . There are so many characters to mention in this book . The guys from the murder squad are a varied bunch . Detective Paul Owens is the lead in the case and he is a no nonsense guy that will get the job done . He works well with Kate and yes there are a few sparks every now and then between them. The detectives and the medical staff make Kate feel like she fits in .

I love a good mystery and this one was good . I will say that I had a bit of trouble at the start and getting into the book but by chapter 3 I was hooked . The author takes us on a journey that has you on the edge of your seat most of the time. The characters are well developed and you can't help but like them . The mystery is one that you try and try to figure out but you really don't until the last chapters . This is a good book to read on a rainy day , or a day at the beach .   Check it out if you love strong characters and a great mystery .
Posted by BOOKS TO CURL UP WITH at 7:41 AM