Good morning all , I survived the storm that blew through last night , there were moments though I thought I was going to get blown over the rainbow. It was a great night to read , I have the second book in the New World of Magic . THE MARCH EFFECT  by Kim Alexander 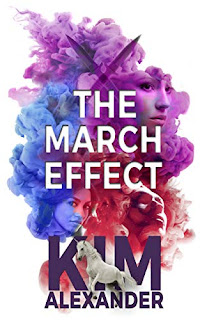 A unicorn walks into a bar…and leaves with my heart.
He’s gone, and now I have a unicorn-named-March-shaped hole in my life. But, I get it. Unicorns aren't meant to live in a world where they have to deal with putting gas in the car, getting groceries, and paying cell phone bills.
I'm trying to get past this. Really, I am. It's just that everyone constantly talks about him, from his immortal ex-girlfriend, to reality TV-obsessed Fae, to even my own fully-human friends. Even his enemies are still obsessed with him. I learned that the hard way. Did I mention the part where I end up on the run—again—from an old, powerful enemy of his? Yeah. Fun times.
I just want to be left to get over my broken heart while watching home improvement shows and eating ice cream. But mysterious disappearances, murder, and a quest for affordable real estate in Washington D.C. keep getting in the way.
Maybe that's just life. Sometimes we get what we want. Sometimes, we get what we need. And sometimes, we get what we deserve. I guess you could call it…The March Effect.

MY REVIEW
Ruby is trying to heal her broken heart after March left . She couldn't blame him , unicorns don't really belong in this world . She knew he had to go but she just wishes her friends would just stop talking about him. She just can't get away from everyone's chatter and then the poor girl ends up on the run yet again . All she wants is to be left alone to eat ice cream and heal her heart . But alas she has to find out about the disappearances and murders and try and figure out her feelings . Will she find what she needs and will she survive to get her life back.

Ruby and the gang are back and getting better with each book . Poor Ruby really needs a break this poor girl has been through it all. She is still sassy and trying to get on with her life . There are characters that you want to slap and hug . Marly is sweet but you really want to help her become whole again. You will want hug and slap a few of the many characters up side the head . They are well written and getting more and more complex

In book two we find out what the effects were after March left this world . The author has put the main character through the ringer and is ripping out her heart as she goes . There are moments where you are on the edge of your seat and other moments you are wanting to wrap up the characters in a warm blanket . The author has a way of telling a story that will have you turning pages . The only thing I wish is the author would give the main character a bit of a break . The poor girl has been through so much ,she needs a vacation . There was a few times i felt the story was just dragging a little and I did kind of felt a little underwhelmed . Over all I enjoyed this book and really want to know if Ruby will ever get her happily ever after . This is a book that you can add to your summer reading list .
Posted by BOOKS TO CURL UP WITH at 7:57 AM