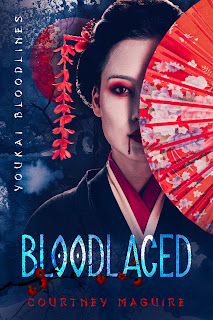 Kanjin hardly view their servants as human. Even less so when they are different.

Asagi is different. Both a man and a woman.

In the wake of his failure to protect a boy he saw as a son from their abusive master, Asagi is sold into the house of a young nobleman, Mahiro, who is the opposite of everything Asagi has ever known—gentle, kind, and generous.

Mahiro bonds with Asagi and their friendship blooms into a deep and profound love. But when Asagi is poisoned out of jealousy, Mahiro reveals himself to be youkai, a demon who feeds on blood, and he has no choice but to turn Asagi to save his life.

Asagi awakes reborn, strong, and eternally youthful. But the price for Asagi’s new life is high.

The blood of the innocent.

Just as Asagi’s trust in Mahiro falters, the boy he failed to protect, now a man, reappears.

With both a literal and proverbial monster at the door, Asagi must decide what it means to be human to protect what he loves most.

Kira released a cry of protest as Mahiro plunged his face into my neck. My sluggish brain struggled to comprehend as he opened his mouth wide and latched on. Heat started at his lips and radiated through me. Like the warmth of a fire on a winter’s day, it traveled through my veins and banished the cold inside. Down my neck, over my shoulders, into my chest.

It doesn’t hurt. Feels good, even.

Mahiro shifted his hold on me, pulling me tighter against him, and I moaned as a pulling ripped at the very moorings of my soul. A small voice in my head rang out like a warning, but it was drowned out by the pleasure of his lips pressed to my skin and the heat in my veins that flowed both out of him and toward him, filling me and draining me at the same time.

I made a choked sound, and he lowered me onto my back on the tatami as my body went limp. I had no power to give in or resist. Just as death tried once again to scratch its way in, something flowed hot and thick into my mouth. Blood. I knew its taste well, but this blood was different. This blood carried something dark with it, infused with something terrible and powerful.

It filled my heart, my head, my lungs. It coaxed my tired muscles to motion, and Mahiro pinned my body down with his as I spasmed beneath him. A moan built in my chest and burst forth unrestrained when his lips finally released mine. I grasped at his clothes, blinking and disoriented. I saw him in front of me but felt him inside me, vibrating through me, an unmistakable yet impossible connection and then…

Blackness, silent and complete. And no pain. It was as if my body had evaporated into a mist and left me formless. Was I dead? As if in answer, my heart pounded a single, heavy beat. Not dead. Different. Reborn.

My body reformed cell by cell, and the first sensation was pain. Not the terrible, gut-tearing pain of the poison, but something sharp and immediate. A pain born from need that encompassed all of me, and instead of dragging me down, it urged me up. My back arched. My veins pumped venom. An ominous, dark voice inside growled Move. Move or die.

The sound of scuffling and raised voices came, and I sensed something hot and bright and alive thrown down close to me. I didn’t know what it was, but I knew I wanted it, needed it. I opened sightless eyes and clawed at it, balking as a high-pitched cry emanated from it.

“Take her, Asagi.” Mahiro’s voice cut through the fog. “It will stop the pain.”

Blinking, the thing in front of me a smear of white light across my vision, I grasped onto it. Something animal and instinctual rose up in me, and I sank my teeth into the brightest part of it. It burst open, filling my mouth with a sweet elixir that filled every part of me until the pain melted into a dark, deep pleasure.

I reached a hand out to meet his and stopped short. Blood. Blood everywhere. On my hands, on my face, in my mouth. The stink of it filled me until I thought I would retch. I screamed and pulled away from the thing beneath me—the golden vessel broken and drained. 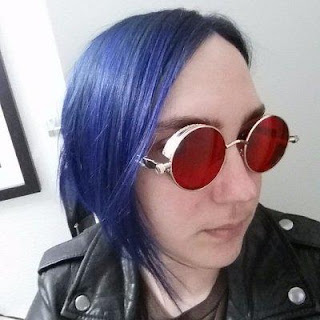 Courtney Maguire is a University of Texas graduate from Corpus Christi, Texas. Drawn to Austin by a voracious appetite for music, she spent most of her young adult life in dark, divey venues nursing a love for the sublimely weird. A self-proclaimed fangirl with a press pass, she combined her love of music and writing as the primary contributor for Japanese music and culture blog, Project: Lixx, interviewing Japanese rock and roll icons and providing live event coverage for appearances across the country.